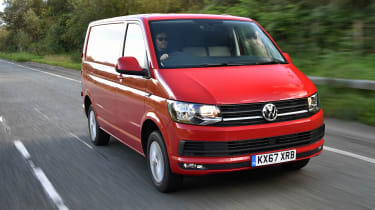 The VW Transporter TSI petrol is a useful addition to the mid-sized van range that will appeal to those buyers who want to avoid the perceived stigma of buying diesel. However, the switch to petrol power won't suit everybody's needs. Fuel economy won't be as good as a diesel, especially in town (although that's where the benefits of its exhaust emissions will be most welcomed), while revving the petrol engine to make progress will be contradictory to any diesel van you may have driven in the past. The T6 petrol is still a bit of a niche choice, and it's worth doing the sums before taking the plunge.

The Volkswagen T6 Transporter is a unique proposition in the mid-sized van sector, because it now comes with petrol engines. The introduction of VW's 2.0-litre TSI turbo petrol offers something different for van buyers who don't want a diesel, the default powerplant choice for the whole van sector.

VW is offering two versions of its 2.0 TSI four-cylinder petrol engine, and we've driven both. With a cubic capacity of 1,984cc, the Transporter's 2.0 TSI is the same size as the engine you'll find in a host of other VW Group models, including the Golf GTI. It's not exactly the same engine as the GTI's, but it does have a similar torquey power delivery that's not disimilar to a diesel. The 150PS version makes 148bhp and 280Nm of torque, and comes with a six-speed manual gearbox, while the 204PS version has 201bhp and the same 280Nm of torque, and comes with VW's seven-speed DSG twin-clutch gearbox. The latter can also be had with 4MOTION four-wheel drive. These petrol engines are offered across the T6 range, so you can get them in the standard panel van, kombi five-seat van, multi-seat shuttle versions, California camper and Caravelle executive minibus body styles.

From the outside, the only thing that distinguishes the petrol models from their diesel counterparts is TSI badging on the tailgate, and this varies according to which body style you've chosen. The only other external clue is on the inside of the fuel filler flap, where there's a label reminding you that 95RON petrol is needed. The similarities between the petrol and diesel Transporters continues inside, as the only difference between the TSI and TDI is a rev counter that maxes out at 8,000rpm, instead of the diesel's 6,000rpm. 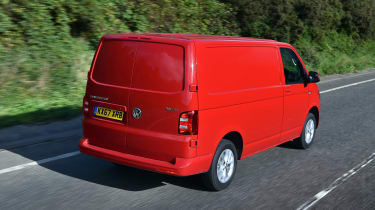 One obvious difference occurs when you start the petrol, because it's quieter than a diesel, especially when cold. However, the difference isn't as significant as you might think. The Transporter doesn't get the same level of sound deadening as VW's cars, so there is a bit more noise at start-up. However, when on the move the 2.0 TSI is far smoother than the diesel, while holding on to gears in the petrol manual gives the van quite a pleasing twin cam-style throaty soundtrack from the engine bay.

• Should you buy a petrol van?

And you will hold on to the gears, because while maximum torque is available from 1,500rpm in both vans, power builds strongly all the way to 6,000rpm. It's a slightly unnatural feeling to be revving a van to the redline when so many diesel powered models don't need to be driven this way. But if you've got a heavy payload on board, that's what you'll be doing.

In the DSG auto, the seven-speed gearbox is keen to kick down to maintain progress, although because the gearbox is so smooth, there's no jerkiness when this happens. One slight niggle with the DSG box is the fact the labelling for the different drive settings is placed to the left of the gearlever, which then obscures them for the driver. Still, that's a feature of the diesel versions, too, and is more of a deal breaker for the van itself, rather than the engine you choose. 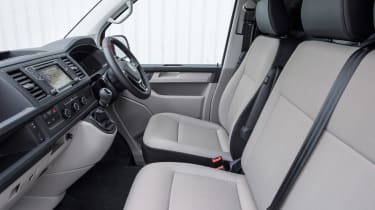 With a payload of around one tonne for the panel van variants, the VW Transporter petrol has the same carrying capacity as the diesel models, but claimed fuel consumption is poorer. During our time with both models, we didn't get much above 30mpg on the trip computer, which isn't far off the claimed figures, but around 15mpg down on the diesels. Standard-fit stop-start will at least help economy in town.

To counter this, the petrol models get an 80-litre fuel tank - compared to 70 litres in the diesels - while prices for the petrol vans are £1,000 less than their diesel equivalents. This will help keep running costs in balance, and means the petrol T6 Transporter could be a viable choice for a van buyer that's keen to ditch diesel.