Following on from the XC90 SUV, Volvo’s taken that car’s striking styling and high-quality cabin and made it work in the S90 with a smart saloon body. It’s not the most dynamic in its class to drive though, while it doesn’t nail ride comfort quite as convincingly as some. Still, undercutting its main rivals on price and offering lots more equipment, the Volvo S90 is a genuine upmarket alternative to its established German rivals.

We sampled Volvo’s svelte new S90 saloon on smooth Spanish roads only last week. But, as ever, we couldn’t wait to get the car back in Britain to see how it fared on our unfortunately pitted tarmac. The range will be made up of D4 and D5 diesel engines – with the former predicted to be the best seller. It’s this car we selected for its first UK test.

The 2.0-litre four-cylinder D4 might be the entry point into the S90 range, but with 187bhp mated to an eight-speed automatic gearbox, the powertrain is more than adequate and offers a decent turn of speed.

A 0-62mph time of 8.2 seconds is acceptable, but it’s the S90’s 400Nm of torque that has a bigger affect on performance. It means overtakes are easy, but you have to be judicious with how much of the throttle’s travel you use – as the gearbox has a habit of wanting to kick down a few gears a little too easily. 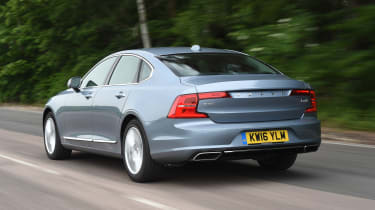 The transmission can make the car feel hesitant, too, as it changes down to find the right gear. But once it’s in its stride it revs cleanly, albeit pumping out a bit more of a diesel growl than in some of its premium rivals. The box handles changes with finesse though, slurring the swapping of ratios nicely, highlighting the S90’s focus on comfort.

With a chassis setup that aims for a relaxed ride, the S90 can’t match the more agile Jaguar XF, for example. But in the most part it’s comfortable. However, ridged or rippled tarmac highlights the limits of the Volvo’s suspension.

Even in Comfort mode on the £950 optional air suspension at the rear with adaptive dampers all-round, and with smaller 18-inch wheels than the 20-inch rims we tried on the launch, the back axle feels unsettled over bigger bumps. 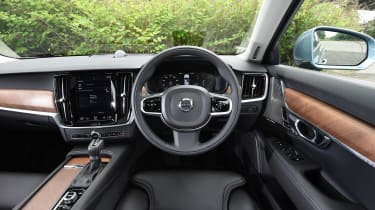 The fast steering gives a positive response on turn-in, but the more fluid approach to body control means the car does roll, with the chassis not able to keep up with the speed of the steering. It still feels safe and secure, just not as well-rounded as some rivals.

On the motorway however, where the S90 will likely spend the majority of its time, it’s a refined way to travel. There’s lots of tech to keep you and your passengers occupied, too.

The S90 features Volvo’s second generation of autonomous driving systems, called Pilot Assist. Unlike the XC90 SUV’s Queue Assist, which only works up to 30mph, the S90’s trick tech can keep you in your lane at up to 80mph. You’ll still have to keep your hands on the wheel so the car knows you’re concentrating, but it’s yet another step towards fully autonomous driving – proving Volvo’s at the forefront of the industry when it comes to these systems. 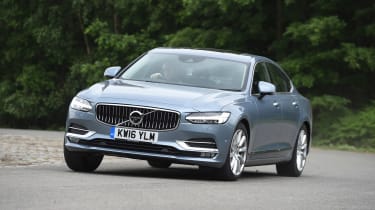 There’s plenty of safety equipment, too. All trim levels get autonomous braking with pedestrian and cyclist detection, adaptive cruise control and seven airbags. For the money, this £35,555 Inscription model also boasts plenty of attractive features. Sat-nav, Bluetooth and DAB are standard, as is leather, keyless go and LED headlights. The infotainment system is controlled by a nine-inch touchscreen, flanked by piano black plastic and lots of real metal highlights for the air vents. Everything is leather lined, contrasting nicely with some cool wood veneer trim inserts. The plastics feel soft and expensive in the most part, too.

It looks every inch the crisp, modern executive saloon. Volvo’s clearly pushing its design forward and has created a smart corporate look that blends sharp lines with bold features, such as the big radiator grille and Thor’s Hammer daytime running lights.

This style doesn’t come at the expense of practicality though, as although the 500-litre boot is a little down on rivals, there’s still lots of luggage space. Passenger room in the front and rear is just as good if not better than its main rivals. Claimed efficiency of 64.2mpg and 116g/km CO2 means the S90 will also be competitive when it comes to all-important running costs.