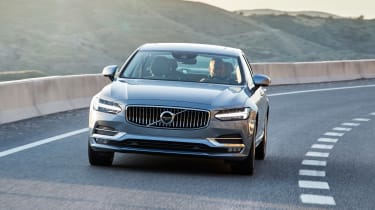 Volvo has finally discovered how to build a quality large executive car, with the S90 transpiring as a tremendously competent offering. It’s well made, stylish and comfortable in a class that favours German conformity. The choice by Volvo to offer only diesels in the UK makes sense but until we have driven the lower-powered D4 version on British roads, it’s unclear which is the pick of the range. Despite this, the new S90 is now a very serious contender.

With the new XC90 large SUV flying out of showrooms, Volvo has found a confident new groove. The V90 estate and S90 saloon models are the next round of cars proudly showing the ‘new’ Volvo approach to building cars, and have a harder job on their hands compared to their SUV sibling. We’ve already sampled the T6 petrol-powered S90 but this is our first chance to try out the range-topping diesel version – a car Volvo will actually sell in the UK.

The S90 has to almost start from scratch in making a Volvo a serious player in the large executive car market. The outgoing S80 may have had unassuming good looks but was somewhat off the pace compared to rivals like the Mercedes E-Class and BMW 5 Series. The S90 needs to be very good to sweet talk UK business people out of their German saloons, then. 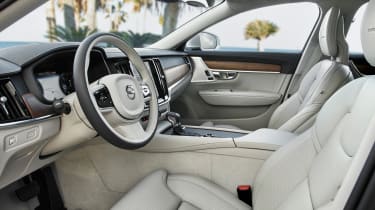 Badged D5 PowerPulse, this model gets a 2.0-litre four-cylinder diesel with a new type of twin-turbocharging under the bonnet. Essentially, the engine features an electric compressor to reduce turbo lag. Our test car had plenty of punch with peak torque low down in the rev range. It’s just a shame then that the eight-speed auto isn’t the sharpest to take advantage of the PowerPulse’s hard work. It’s fine in most situations but a Jaguar XF or a BMW 5 Series both offer snappier changes.

The gearbox is just a very small niggle in an otherwise impressive package. The S90’s real triumph is refinement. The 2.0-litre diesel barely hunters more than a hum when cruising and even under hard acceleration it rarely makes a fuss. It’s lost the old D5’s five-cylinder warble but it’s a smooth and unflustered engine.

This trait sums up the rest of the S90, too. Our car had the optional air suspension and in Comfort mode that makes for an ocean liner-like experience. In Dynamic mode the suspension stiffens and the steering and throttle responses are sharper. Its focus on comfort is the S90’s trump card in this class, though, with most of its rivals being positioned towards the sportier end of the spectrum. A word of caution though – don’t spec the air suspension and go for 20 or 21-inch wheels, as the larger alloys cancel out the suspension’s comfortable attributes. 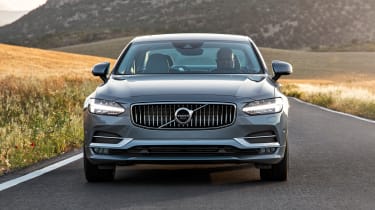 While a Jag XF and a 5 Series are sharper to drive, that’s not to say the S90 is a lemon on a twisty road. In fact, the S90 still has just the right amount of driver involvement – with the all-wheel drive system making for composed, grippy progress. The light steering makes placing the S90 on the road easy, too.

The D5 emits 129g/km and returns 57.6mpg on the combined cycle. The D4 is slightly more efficient, claiming 116g/km and 62.7mpg – so no wonder why Volvo isn’t offering petrols.

Interior quality is top-notch, and the whole cabin is stylishly designed and spacious. Six-footers will easily find enough room in the back seats. There’s a wealth of safety kit too, including Pilot Assist and Large Animal Detection. The former is essentially a very clever semi-autonomous adaptive cruise control system that assists the driver with steering movements and throttle control on the motorway and works up to 80mph – it’s a development of the XC90’s system but in the SUV it only works up to speeds of 20mph.