Not that long ago, Volvo load-luggers and their owners were the objects of derision. How times change. By focusing on performance range-toppers and vehicles suited for the lifestyle most of us wish we had, Volvo has transformed its image from staid to sexy. The All Wheel Drive version of the V50 is no exception - which is why Auto Express just had to get behind the wheel. 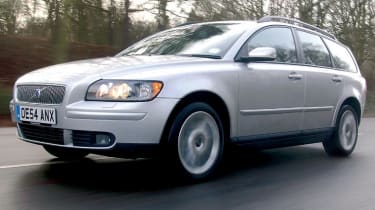 A performance estate with 4WD is a must-have for car makers in the compact executive class. But Volvo's V50 AWD is more than a lifestyle accessory, as it improves upon the decent dynamics of the two-wheel-drive model. Shame there are no plans to bring the AWD version of the S40 here.

Not that long ago, Volvo load-luggers and their owners were the objects of derision. How times change. By focusing on performance range-toppers and vehicles suited for the lifestyle most of us wish we had, Volvo has transformed its image from staid to sexy. The All Wheel Drive version of the V50 is no exception - which is why Auto Express just had to get behind the wheel.

While it is based on the same platform as the new Ford Focus, the chunky lines, high waist and rectangular grille leave no one in any doubt that this is a Volvo through and through. Inside, it is the same story thanks to comfortable, yet supportive, seats, a near-perfect driving position and the flash-looking 'floating' centre console.

But there is little to identify this top-spec variant from lesser V50 models. Ignoring the badge on the boot, the only thing that hints at this being four-wheel drive is its stance on the road.

The AWD sits higher off the ground than the standard front-driven estate because the shaft to the rear wheels needs more space between the chassis and body. However, the difference is barely perceptible. And Volvo has done its best to ensure you do not feel it from the driving seat, either.

What you do notice is the V50's ability to use the power from its turbo-charged 2.5-litre engine. The added weight of the four-wheel-drive system makes the AWD model slower against the clock than its two-wheel-drive twin.

Yet it feels more stable, applying its 220bhp to the road with a lot less drama. This particularly stands out on damp surfaces, where there is none of the wheelspin that's associated with the standard estate's transmission.

The 4WD system - lifted from the V70, XC70 and XC90 - also delivers a more agile drive on twisty B-roads. This is helped by a combination of things, including the heavier drivetrain over the rear wheels evening up the V50's balance. What's more, nicely weighted steering and a well controlled chassis that resists roll play their parts, too.

The experience is topped off by the engine. Not only does the unit emit a meaty sound, it is also got plenty of go. The turbo provides power from low revs, and winds itself up progressively rather than delivering its grunt in one go. The tight six-speed gearbox is also a gem. But the downside to this model is that it hits you in the pocket. Not only is the AWD £1,000 more than the standard SE, economy dips below 30mpg, to return 29 to the gallon.

Top speed is also dented, but when the difference is only a drop from 149 to 143mph, this really is not an issue. Besides, there are some sweeteners: the AWD only comes in SE spec, so sat- nav and cruise control are standard. Anyone expecting a load-lugger on the scale of the V70, though, will be disappointed, because the boot is smaller, so a family's luggage will be a squeeze. On the plus side, a space divider improves the cargo area's practicality.

And safety kit is impressive with strong brakes, electronic driver aids and airbags all-round. This all contributes to a package that makes the AWD the most dynamic and desirable V50 yet.