If you're a traffic cop, then we've got great news for you! The new Volvo V70 is about to go on sale - and it's kinder to your backside 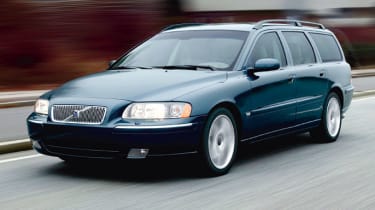 The V70 is as good as ever. The improvements might not seem too significant, but they give the car extra spec, even more comfort and, on T5 models, a moderate performance boost as well. BLIS is also a great safety idea, and we look forward to seeing it developed across other models in the Volvo and Ford stables.

If you're a traffic cop, then we've got great news for you! The new Volvo V70 is about to go on sale - and it's much kinder to your backside than the outgoing model.

The Swedish manufacturer has changed the seats to make them softer, stronger and longer than before, meaning the car is a much nicer place to spend your working day. Trust us: we've driven it, and it's one of the most comfortable motors we've ever sampled.

But it's not only the seats that have been given a makeover. They are merely part of a thorough mid-life facelift for the big Swede, in order to keep it looking fresh until its replacement eventually arrives in 2007. In typical Volvo style, the work is discreet. There are many changes, but they're not immediately obvious to the eye.

From the outside, the most noticeable alterations are in relation to the grille and bumpers. The nose is angled back slightly to match the profile of the headlights, while on SE variants the bumper now features chrome inserts in place of the black rubbing strips on previous V70s. Body-coloured trim distinguishes Sport models from the less performance-focused versions.

New 17-inch alloy wheels, clear rear lamp lenses and a range of brighter metallic paints complete the external changes. Meanwhile, on the inside, as well as the new seats, the centre console, steering wheel and instrument binnacle have been mildly madeover. The attractiveness of the previous V70's dashboard has been retained, but build quality is even higher than before. If you're a fan of clean design and enjoy comfort, then this is a model that could show even the German firms a thing or two about interior layouts.

As ever, the boot is huge and easy to access - and it's logically thought out, too. It has a waste bag holder, grocery hooks and bottle pockets to stop small loads rolling free, while the rear bench tumbles flat quickly and easily, should you need to fill it with traffic cones, speed guns and fluorescent jackets.

And we reckon that'll happen quite often, as the forces' favourite now has an extra 10bhp under the bonnet to chase those law-breakers. The turbocharged five-cylinder T5 engine's capacity has been increased by 100cc, up from 2.3 litres to 2.4, and it now offers 260bhp. That's enough to give lightning acceleration and an electronically limited top speed of 155mph, which, as any traffic cop will tell you, is more than enough for Britain, thank you very much.

The extra performance can be combined with Volvo's well regarded Four-C active chassis. This £2,100 option gives two suspension settings: Comfort and Sport. You can enjoy those lovely new seats to the full with the former, while the latter transforms the V70 into traffic cop mode, firming up the ride and sharpening the chassis response. Our test drive was also the first time we've sampled Volvo's new Blind Spot Information System (BLIS). This automatically detects when another vehicle is travelling alongside you but is not visible, and illuminates an amber warning triangle in the door mirror to make lane changing safer. It is an effective system that works well, and is a welcome addition to the standard specification of S60s and V70s.

Of course, the V70 is an estate par excellence, and the raft of changes introduced for the 2005 model year, which goes on sale here this month, serve to further enhance that fact. It might not be the most exciting car around, but it's beautifully finished and one of the most comfortable motors on the market.