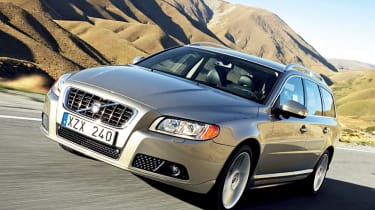 Nothing wears a Volvo badge quite like a big estate. The new V70 is a relaxed and refined cruiser with a classy image and some practical touches. A built-in booster seat will answer the prayers of many parents, but a bigger boot would give the Swedish model the luggage capacity it needs to topple the most practical rivals.

Family cars come in all shapes and sizes these days - regardless of which end of the market buyers look at, they are spoiled for choice.

With off-roaders, people carriers and crossover models all available, it's easy to forget Volvo's original solution to versatile motoring - the estate. However, all that could change with the company's all-new V70.

Auto Express was invited to an exclusive early drive to see how the new model compares to the competition, as pre-production V70s went head-to-head with the Audi A6 Avant and BMW 5-Series Touring.

The V70's looks are predictably understated. From the front, it's impossible to distinguish the estate from the S80 saloon on which it's based. Only at the rear has Volvo faced the challenge of merging a practical shape with attractive styling. The result is far from elegant, but it brings the V70 up-to-date. Designers have split the rear lights between fixed positions and tailgate mountings, giving a look similar to the C30 hatch.

Inside, the S80 styling touches are clear. The dashboard is lifted from the saloon, which makes for a classy, high-quality cabin. Head and legroom are spacious for all passengers, and the rear seats split 40/20/40. Buyers even have the option of an integrated child booster seat with two height settings.

Lifting the tailgate gives access to a 540-litre luggage area. This falls short of the 565-litre A6 Avant and well behind the 690-litre Mercedes E-Class. Designers have made the best of the space by fitting aluminium rails and dividers, but the V70 isn't the most practical estate in its class.

While the prototypes driven at Volvo's Swedish test track were yet to undergo final chassis tweaks, they retained the firm's trademark relaxing dynamics. With a smooth 3.2-litre petrol engine under the bonnet, the V70 is a great long-distance cruiser, with the automatic transmission swapping ratios smoothly.

Only when the road gets twisty does the big Volvo start to show similar drawbacks to the S80. The V70 turns impressively into corners, but it simply doesn't display the same nimble handling as the 5-Series and A6. Sweeping bends see the estate lumbering wide, but Volvo claims improvements will be made to the suspension before the production model appears in September. Prices are yet to be announced, but buyers can expect to pay around £1,500 more than the equivalent S80. As a result, entry-level variants will start at £26,500. Those who want more performance will also get the option of a new 281bhp T6 powerplant.

Volvo's big estate is back, but we're not sure it has evolved at the same rate as the competition.