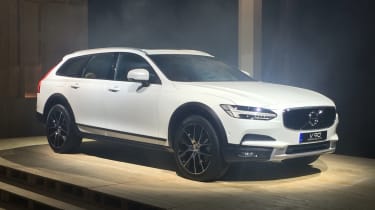 Volvo has unveiled its new V90 Cross Country - an off-road estate model to sit below the XC90 SUV and rival the Audi A6 Allroad and forthcoming Mercedes E-Class ‘All Terrain’.

The brand-new Volvo V90 Cross Country was revealed at an exclusive event in Malmo, Sweden, while simultaneously being unveiled at locations in Switzerland and the US. The off-road estate car will go on sale early next year as a replacement for the ageing V70 Cross Country – and is the "last piece of the 90-series jigsaw puzzle" according to Volvo body CEO Håkan Samuelsson.

Following a series of teaser videos and images, the wraps came off the new V90 Cross Country showing a bulked up version of the standard V90 estate model, with a ride height raised by 60mm and subtle cladding on the front, side and rear of the car. 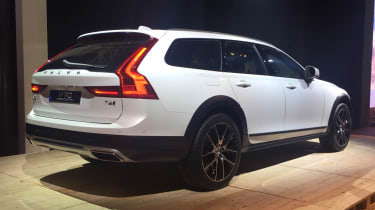 Volvo has a long-standing history of creating off-road estates under the Cross Country or 'XC' moniker. Samuelsson said: "Cross Country has become the true expression of a Volvo car in many peoples’ eyes. It was a winning concept from the start, perfect for the tough climate and road conditions that we experience in Sweden."

The V90 Cross Country will carry over the four-wheel drive powertrains from the Volvo XC90 SUV, as well as an all-wheel drive version of the entry-level D4 found in the standard V90. That car will do 0-62mph in 8.8 seconds, and emit 134g/km when mated to a six-speed manual gearbox. The auto version posts identical acceleration figures, but emits 4g/km more.

A more powerful D5 will also be on offer from launch. Available only with an automatic gearbox, it’ll do 0-62mph in 7.5 seconds and emit 139g/km of CO2. It should return around 53.3mpg.

The V90 and XC90 share the same platform - meaning the the powerful T8 hybrid should make it into the Cross Country at a later date. In the XC90, the T8 uses a four-cylinder petrol and an electric motor to produce 395bhp, giving it a 0-62mph time of 5.3 seconds and fuel economy of 134.5mpg, both of which should be improved on in the smaller Cross Country model. 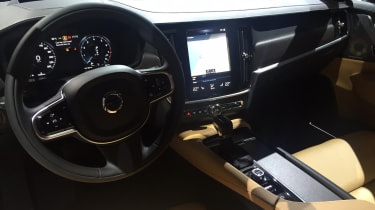 Despite its modest looks, the V90 Cross Country will be a truly capable off-roader. As well as raising the ride height by 60mm, the V90 CC gets special Pierelli tyres for better grip and a softer ride. Engineers have also tuned over 200 different chassis characteristics to make the Cross Country "as at home on the highway as it is on a frozen forest track".

Prices will be announced closer to the car’s on sale date, but expect the Cross Country to command a premium of around £4,000 over the standard V90 estate. Unlike the standard estate model, there is only one specification – with no Inscription or R-Design versions planned in the future. Buyers wanting a sportier looking V90 Cross Country can swap the black cladding for body-coloured items.

The V90 Cross Country D5 AWD should cost around £45,000 – putting it on a par with the six-cylinder Audi A6 Allroad. An entry-level D4 AWD will be several thousand pounds cheaper.

What do you think of the new Volvo V90 Cross Country? Leave us a comment below...