For an indication of how much Volvo's customer base has changed, check out this fact: last year the XC90 off-roader was the company's best-selling vehicle, finding even more buyers than the V70 estate. 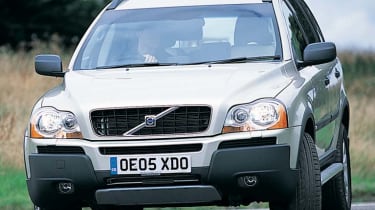 As 60 per cent of XC90 sales are diesel, this engine upgrade is very important for Volvo. And it's an impressive unit. Powerful, quiet and economical, it copes well with the XC90's weight, particularly when mated to the new six-speed auto. With superb residuals and generous kit, few SUVs offer such a comprehensive package.

For an indication of how much Volvo's customer base has changed, check out this fact: last year the XC90 off-roader was the company's best-selling vehicle, finding even more buyers than the V70 estate.

Good news, then, for a firm that was, until recently, defined by its more traditional models. But with increased competition from the revised BMW X5, plus the all-new Mercedes M-Class and Land Rover Discovery, the Swedish com- pany needs to stay on top of its game.

Which is why the XC90 is getting a more muscular diesel engine. Avail-able now, the 2.4-litre in-line five-cylinder unit gains a new turbocharger and management system. Power is up from 163bhp to 185bhp, with torque rising from 340Nm to 400Nm. That's enough to cut the 0-62mph time from 12.3 to 11.5 seconds.

The car is much more responsive, too, with strong in-gear acceleration and plenty of power for overtaking. And although the XC90 D5 isn't quite as quick as the X5 3.0d, it has the measure of the Discovery TDV6.

It's also very refined at speed, with a characterful five-cylinder rumble, and while economy suffers slightly - down from 34.4mpg to 31.4mpg - the CO2 emissions are unchanged at 239g/km. Another improvement is the new £1,350 six-speed Geartronic transmission, which is available from October. Where the outgoing five-speed gearbox could be ponderous, the new set-up is sharper, particularly during kickdown. In addition, the range is boosted by a precise new six-speed manual gearbox, fitted as standard to the 185bhp D5.

Volvo has also added a new Haldex four-wheel-drive system - similar to VW's - which balances power between the front and rear wheels depending on conditions. The XC90 still feels the same to drive, though, with comfortable rather than sporty handling.

Inside, new Inscription luxury up-holstery can be specified. This offers a variety of different colour combinations for the seats, door trims and steering wheel, but costs a hefty £2,260.

The new Geartronic auto is also a huge improvement. Factor in the excellent seven-seater layout, beautifully built cabin and relaxing driving experience, and the Volvo is now better equipped than ever to compete with its rivals.