The ageing XC90 SUV has been updated in a bid to keep up with rivals, so does it deliver 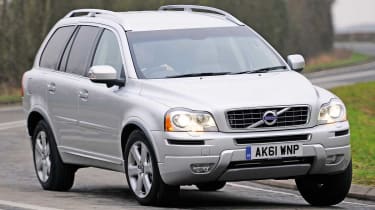 It's getting on a bit, but there’s still a lot to like about the XC90. While there are greener and more economical cars in the class, it’s relaxing to drive, practical and refined. These updates sharpen up the looks a little, although Volvo hasn’t done enough inside to keep pace with new rivals. Yet part of the car’s appeal is that it isn’t an Audi, BMW or Merc.

The XC90 is one of the most popular Volvos ever made, and as it enters its 10th year, the SUV has been given a round of updates to keep it fresh. But with rivals like Mercedes’ new M-Class on the way, can it still cut it?
The most obvious changes are the introduction of 18-inch six-spoke alloys, as well as LED headlights and tail-lamps. The roof rails, protective front and rear skid plates and new side body mouldings are painted silver, too.
Inside, there are aluminium highlights as standard, plus a new steering wheel, white dash lighting and leather tailgate grab handle. Bluetooth music streaming is also included, while the flagship R-Design trim gets new 19-inch alloys and redesigned upholstery.

Behind the wheel, the leather seat is comfortable and the driving position is good. The new dials are clear and concise, and all-round vision is excellent. Plus, there are loads of features: steering wheel-mounted switches for the cruise control, stereo and Bluetooth hands-free, along with heated seats, Volvo’s BLIS blind-spot warning system and satellite navigation.
Yet the XC90 feels old. The centre console’s glossy black plastic and switchgear look dated, as does the sat-nav. You don’t get a touchscreen or a reversing camera (it has parking sensors), while there’s no stop-start, either. These features are common on the XC90’s rivals.
Nevertheless, it all comes together impressively. The cabin is relaxing and comfortable and it still feels solid and sturdy. It’s pretty good to drive, too. The 2.4-litre turbocharged five-cylinder diesel engine makes a characterful warble while delivering its 197bhp and 420Nm of torque. The six-speed automatic shifts smoothly and suits the car’s laid-back nature – if you want brisk acceleration for overtaking, you’re better off holding it in gear with the lever (there are no paddles), as kickdown response is slow.
The XC90’s road manners are excellent. It handles well for its size, delivering a supple ride and soaking up potholes with ease, while the brakes are powerful. The size and weight mean the Volvo is a little on the thirsty side – you’ll be lucky to see 30mpg fuel economy and it emits 219g/km of CO2, so a year’s road tax will cost £260. The all-new ML350 CDI claims 41.5mpg and 179g/km.
However, the XC90’s seven- seat layout is a big plus. Even third-row passengers are well catered for with air-con controls and a centre console, plus side storage bins. All the rear seats fold flat easily, too.
The car impresses by still being able to muster a fight at its age. It remains an effective, luxurious, rugged-looking and practical people mover. It’s not as flamboyant as an M-Class, Audi Q7 or BMW X5, but it’s still a class contender.
Share this on TwitterShare this on FacebookEmail