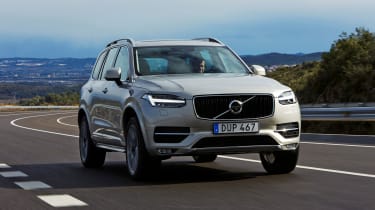 It’s been well worth the wait – the new XC90 is very good indeed. By avoiding the temptation to compete with rivals’ go-anywhere ability or unnecessary sporting prowess, Volvo has created a car that’s easy and enjoyable to live with, day-in, day-out. It’s comfy, spacious, efficient, safe, refined, well made and good to drive – just what a great many buyers want from a family-friendly SUV. If this is what Volvo’s future is going to be like, it’s going to be great.

When the Volvo XC90 burst on to the scene back in 2002, it set new standards for family-friendly SUVs and helped change our perception of Volvo. Now, in 2015, the all-new XC90 model is expected to do the same – that’s some responsibility resting on its typically broad shoulders.

What’s clear is that no stone has been left unturned during the four years it has taken to get the car on the road. There’s an all-new platform and modular four-cylinder engines that will be the building blocks for all the large and medium-sized Volvos we’ll see over the next few years – by 2020, the XC90 will again be the oldest model in the range.

What’s most refreshing is how this car drives – Volvo’s no longer chasing BMW, but ploughing its own, more laid- back, furrow. The Swedes know a thing or two about relaxation, and this car will soothe your stresses even during long hours behind the wheel.

Volvo’s also taking a lead on tech – there’s so much in this car, it’s no wonder it suggests customers spend the best part of an hour learning about their cars before taking delivery. And that will only scratch the surface.

The handsome new look, with its bold grille, smoothed over bonnet, updated Iron Mark badge and ‘Thor Hammer’ LED running lights at the front will become commonplace as the XC90’s new siblings arrive. But it’s the interior that’s most striking, and one of the best car cabins we’ve been in.

It’s a lesson in how a well integrated touchscreen can maximise a minimalist design – there are only eight buttons on the dash, with the rest of the controls taken care of by the nine-inch portrait-orientated screen.

And very clever it is, too, with an iPad-style home key at the bottom to rescue you from the depths of some of the functions and with the all-important climate controls ever-present. It’s slick to use and generally intuitive, although it lacks the clarity of an Apple system, looking a little cluttered at times. 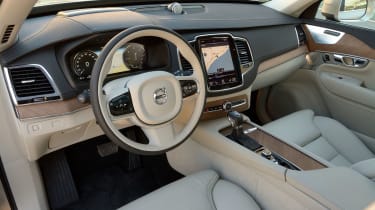 After a few hours behind the wheel, though, using it became second nature, while it also controls the optional 19-speaker audio system from British brand Bowers and Wilkins. In spite of Abba pre-programmed to play every time we turned it on, it provides a beautifully detailed, yet punchy sound.

Interior quality may be the tiniest bit shy of Audi, but the standard leather seats on all models add a touch of class, as do the subtle amounts of chrome across the dash and crystal edges to the twisting starter knob and the scroll wheel you use to select drive modes.

Volvo’s decision to stick with four-cylinder engines in the XC90 has meant more cabin space, helped by an increase in length by 150mm to 4,950mm. This is a big car, not helped from the driving seat by the curvature of the bonnet, which leaves a fair bit of guesswork (or reliance on parking sensors) to know how far away the front of the car is. 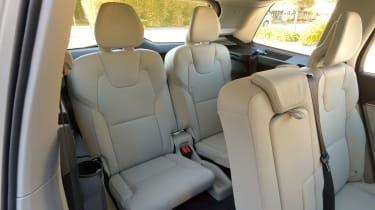 Space in the second row is very impressive, while the middle chairs slide forward to reveal seats six and seven, which pop up from the boot floor. They’re the same size as those in row two, and set slightly inward to improve the view forward.

Space in the third row isn’t bad at all, but having 451 litres of luggage capacity with all seats in use is a real bonus – you don’t get that in most MPVs. That figure rises to a massive 1,951 litres with all rear seats down. They fold easily, too.

All three rows are protected by side airbags and Volvo says this is the world’s safest SUV – the company’s on a mission to ensure nobody dies in a Volvo by 2020. With tech that protects occupants if the car leaves the road, cameras that can detect cyclists and pedestrians, and the latest autobrake system to prevent you from crossing traffic if something’s coming the other way, we can well believe it

Although some of the tech is on the options list, all models are decently equipped, with prices starting at a competitive £45,550. Most popular trim will be Momentum, or you can choose sportier R-Design or more luxurious Inscription trim like that on our test car. 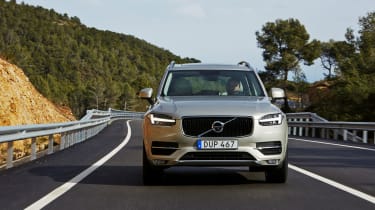 While we drove the T8 plug-in hybrid (see panel, opposite) and the 316bhp T6 petrol, we concentrated on the big-selling 222bhp D5 diesel. It’s efficient enough, claiming 48.7mpg and 149g/km of CO2, and also rather nice to use: smooth, with plenty of power and a deep-cultured growl.

The ride is rather good, too. We only drove a car with air-suspension, which was slightly pattery over smaller bumps but generally very comfortable. Avoid the optional 21-inch wheels, though. Even on big wheels, this is an incredibly quiet car, with only a tiny bit of wind noise to spoil the near silence.

And although it’s a ‘Sport Utility Vehicle’, it doesn’t have a sporty bent at all – the steering is direct and responsive, if a little light in feel, and although there’s plenty of grip, you’ll be leaning along with the car if you’re too enthusiastic through corners.

While all models are four-wheel drive, there was no mention by Volvo of going off-road, other than the protection on offer if you do it by accident. Volvo knows how XC90 buyers will use their cars, and it’s that focus that makes this car so very appealing.