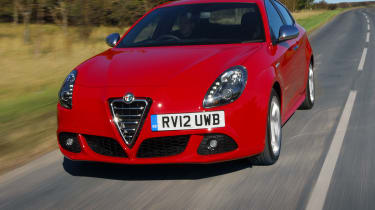 Alfa Romeo is trying to win over the hearts of buyers with the Giulietta’s styling, and their minds with a hard business case for the TCT gearbox. The Focus and Golf are more talented in some areas, especially in the way they drive and the quality of their interiors. But with the addition of the TCT gearbox, the Giulietta is narrowing the gap.

Twin-clutch gearboxes are popular among car makers for delivering low emissions without compromising performance. And now the Alfa Romeo Giulietta has joined the party, as it's now available in the UK with the firm's TCT transmission. Alfa claims it gives a sportier drive than a normal auto, as well as better economy and emissions. Now we've driven it on UK roads.
The TCT gearbox is offered with either the 1.4 MultiAir petrol or 2.0 JTDm-2 (170) diesel. And first impressions are good, as it makes the Giulietta more relaxing to drive. Move the gearlever into Drive, and the gearbox lets the Giulietta creep forward as soon as the brake is released, just like a conventional auto. And once you're on the move, gearchanges are hard to detect. The stop-start system works well, too, as it fires up without delay.

When a burst of acceleration is needed, both the petrol and diesel engines are more than up to the job. But the car’s settings need to be spot-on to make it a satisfying experience. With the Alfa DNA switch set to Normal, the gearbox is reluctant to kickdown, sometimes refusing completely unless you bury the accelerator to the floor. This is great for economy, but not so good for overtaking. However, with the switch set to Dynamic, the Giulietta readily drops a few gears. But the diesel sounds harsh at high revs, and the gearbox holds on to low gears for too long after the driver has lifted the throttle.
It’s much more pleasing to leave the DNA switch in Normal and use the standard-fit steering wheel paddleshifters to select a lower gear. It’s quicker than changing the DNA settings and keeps the driver in control, letting you decide exactly where in the rev range you want to be. After the overtaking manoeuver is complete, a flip of the ‘up’ paddle instantly selects a higher gear, and the gearbox reverts to automatic mode.
Whatever the DNA setting, the Giulietta's ride is firm, with little body roll, and the Alfa feels sporty. Choose the attractive 17-inch or 18-inch wheels, and the Giulietta can get a bit jarring on poor road surfaces, but the smaller 16-inch wheels make the ride much more compliant, without losing the sporty edge. However, the Alfa never feels quite as composed as rivals.
With 70 per cent of Giuliettas going to fleet buyers, it’s the emissions and economy that matter most. And Alfa can be pleased with how the Giulietta TCT stacks up against rivals as a company car.
Take the similarly priced Volkswagen Golf 1.4 GT TSI DSG. It has less power and torque than the 1.4 MultiAir petrol Giulietta, while CO2 emissions are 18g/km higher than the Alfa’s 121g/km figure. The VW’s combined economy of 44.8mpg is nearly 10mpg adrift of the Alfa’s 54.3mpg, too. All this means the petrol Giulietta will be taxed at 15 per cent as a company car in 2012, while the Golf’s higher list price means it will be taxed at 18 per cent.
Like the petrol version, the diesel Giulietta’s figures are better than the equivalent Golf or Focus, too. It emits just 119g/km of CO2 and manages 62.8mpg on the combined cycle.
Overall, this version of the Giulietta makes a strong case for itself as a company car choice.
Share this on TwitterShare this on FacebookEmail