Auto Express is first behind the wheel of the hotly anticipated Audi A1. 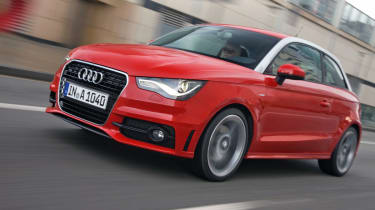 So all indications are that Audi has done exactly what we expected with the A1. It feels like every other car in the family and, in truth, it actually feels more like an A4 than an A3 in the way it copes with everything the road can throw at it.It is beautifully built, it is strong and feels utterly bullet proof. But there’s a downside to that - where the MINI's powerful image helps it stand on its own, the A1 could suffer from not having enough of a unique character compared to its siblings.But for a lot of people, a sub-4m car that costs less, is dripping with quality fittings and feels like an A4 will be just the ticket, thanks very much.

As small as a MINI, as well built as an A4 - meet the new small Audi that's got a huge job to do convincing premium car drivers that good things really can come in the smallest packages.

And there's no doubt that when it comes to quality and kerbside appeal the A1 has got off to the best possible start.

Order books for the eagerly anticipated supermini opened last month - and announced that the car would cost from £13,145 – around £400 more than the similarly-powered MINI One.

Video: watch CarBuyer's video review of the Audi A1

A seven-speed twin-clutch S-tronic transmission is available solely on the 1.4 at an additional cost of £1,420 and doubles as a rich man’s automatic.

Start/stop and regenerative braking technology will be standard on all models in the range.  We are testing the 1.4-litre TSI engined car, a flagship model which is tipped to be a big seller.

In terms of design, the car doesn’t aim up at the sheer cheek of the MINI, but works hard to convince you that it’s a fully fledged member of the Audi family, rather than a stand-alone baby car.

There is the typically Audi grille, a steeply sloping c-pillar and a hatch that looks like a 60 percent copy of the one on the Q5.

It gets daytime running lights similar to the ones in the new A8, too, and they even have a front-facing camera that detects oncoming cars at night and automatically switches between high and low beam.

Oh, and there is also Competition Aerodynamics pack (for a car that will never see competition) and there is the ubiquitous S-Line package at the top of the range.  If there has been widespread customer criticism of the quality of the plastic material on the current MINI, look no further than the A1 if you want to know how well it can be done...

There’s a long, curved instrument panel that gives the impression of being impossibly wide for a car this size, four round vents that can be coloured as you wish and a pop-up 6.5-inch MMI screen for everything from navigation to the audio system.

There is a pair of cupholders, coin holders and a general cubby hole, plus healthy door pockets and an unusually useful glovebox, too. The seats look a bit flashier than they do on any other Audi, and rear legroom is useful for children and, on short trips, adults.

They’ve given the luggage space more thought than MINI, too, because there are fold-down curry hooks on both sidewalls, an elastic holding strap on one side, a perfectly flat floor and four tie-down hooks. And it’s much bigger when you fold down the rear seats.

Where Audi has filled the A1 with the signature interior quality you’d expect, they haven’t quite given it the chirpy character of the MINI and, in terms of its performance, this car is clearly after the One, not the Cooper S.

Even with the direct-injection, turbo-charged 1.4-litre petrol engine sitting across the front axle, the A1 isn’t going to scream off into the distance in a haze of tyre smoke.

Instead, it’s going to be strong and flexible in any gear, at any time. The 1.4-litre engine has 120bhp, so it’s no weakling at high revs, but its real strength is between 1500rpm and 4000, where all of its 200Nm of torque is available for heavy lifting all of the time.

That it gets from 0 to 62mph in 8.9 seconds is really only half of the story, because the rest is about its flexibility, which is very helpful around town.

It’s a smooth engine, too, and has a cranky little rort to it on full throttle blasts, with the exhaust note getting deeper as it pulls past 4000rpm and then yelling in enthusiasm right up high. But it’s never intrusive and, when it’s mated to the optional seven-speed DSG (or whatever Audi’s calling it these days), it’s pretty slick, too.

There’s good fuel economy as well, with Audi claiming 5.2 litres/100km, or 52.3mpg, and that number is helped by the stop-start system that isn’t as smooth on takeoff as it probably should be, but that’s about it for driveline grizzles.

Ride quality is a big issue around the cities and the A1 is surprisingly supple – at least in its standard form. Its handling is clean and neat, rather than the edgy sharpness of the MINI family, but its ride quality easily surpasses the British car.

But the big question remains... Should you buy one over a MINI? Don't miss our forthcoming test, which will offer the question once and for all.

For now though, while we love the A1's grown up feel, it's comparative lack focus on sportyness is the single question mark.

While we love the looks, the practicality, the refinement and the grown up feel, a decent injection of driver appeal would transform the car.