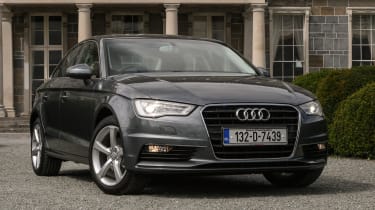 Just as the Porsche Cayman is a smaller, cheaper alternative to the 911, the Audi A3 Saloon seems to be treading on the A4’s toes. The Mercedes CLA rival has now arrived in right-hand-drive form, but the question remains: should the A4 be scared about losing sales to its little brother?

It has good reason to worry – the Audi A3 Saloon immediately grabs your attention with its attractive, clean-cut design. Few four-door models at any price are as well proportioned. The interior is pretty special, too – up front it’s identical to any other Audi A3, which means exquisitely designed switchgear that’s a joy to use.

The Saloon is based on the longer wheelbase of the five-door A3 Sportback, but is 150mm longer overall, plus 11mm wider and 9mm lower. Rear legroom still doesn’t match that of the Audi A4, but there’s more room than in the back of the Mercedes CLA. It’s the Mercedes that wins on boot space, though, with 470 litres versus 425 litres.

There’s little obvious difference between how the Audi A3 Saloon drives compared to its hatchback siblings. On the standard 17-inch alloys fitted to our Sport test car, it’s as comfortable at motorway speeds as it is in town. Only the largest bumps and potholes send jolts through the base of your seat, and as with other models based on the same MQB platform, including the new SEAT Leon and Volkswagen Golf, refinement is impeccable.

This 138bhp 1.4 TFSI engine is the entry point to the Audi A3 Saloon range, positioning it as a slightly more premium product than the hatches, which are available with a 104bhp 1.2 TFSI. It never feels like a base-spec car, though, with feisty acceleration when you keep the throttle floored and let the turbos hit their stride.

The S tronic gearbox is now so polished that leaving it in Normal mode and letting it shift itself no longer means sacrificing sportiness. Squeeze the throttle and the box quickly finds the right ratio to bring the turbos on boost and rocket you down the road.

But this engine has an extra trick. Like the twin-turbo 4.0-litre V8 in the Bentley Continental GT and Audi S6, it can shut down half its cylinders on light throttle loads.

It’s a seamless process, but one that pays dividends in terms of fuel economy and emissions. Despite the strong performance, the Audi A3 Saloon returns 60.1mpg and 109g/km of CO2. That means this engine makes much more sense than a diesel if you don’t do many miles.