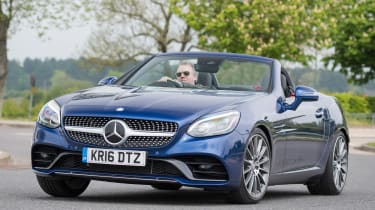 Since its introduction in 1995, the Audi A4 has proved to be a popular compact executive car, with over five million sold since launch. The current car is the fourth generation, and as well as a saloon body, it's also offered as an Avant estate and rugged Allroad model. The Allroad is similar to Volvo's XC70 and gets a raised ride height and quattro four-wheel drive technology for mild off-road ability.

The A4 shares its platform with Audi's sportier A5 coupe and convertible models, and was launched in 2008. It received a facelift mid-way through 2011, with updates including new headlamps and LED running lights, a reshaped grille and revised tail-lights. The main upgrade to the interior was a more intuitive MMI infotainment system.

Audi offers the A4 with a choice of four petrol engines - the 1.8 TFSI, 2.0 TFSI units are available on all SE, SE Technik, Black Edition, and sportier S Line models, while the petrol 3.0 V6 is available solely on the Black Edition.

Buyers of the high performance S4 and RS4 Avant quattro models will find their cars powered by a 3.0 V6 and 4.2 V8 respectively. It is also worth noting the Audi RS 4 is only available in Avant estate guise.

An all-new Audi A4 will be revealed later in 2015, with a sharper new look, and a lower weight to help improve its dynamics and economy.

The attractive exterior and classy cabin do a fine job of keeping the A4 in contention, but lacklustre driving dynamics betray its advancing years. There’s nothing wrong with the A4’s safe and composed handling, but it lacks the driver engagement of the class-leading BMW 3 Series, and to a lesser extent the Mercedes C-Class.

The A4’s steering is precise, body control is decent and there’s enough grip on offer, but push on and you’ll notice the stability control light flickering and feel some corruption in the steering as the front wheels search for traction. You’ll only spot this occasionally, but the A4 lacks the agility, steering purity and traction of the best cars in this class.

Buyers wanting a sharper driving experience can specify the even firmer S line suspension, plus the £220 Drive Select system, which allows you to alter the steering and throttle response to suit the conditions. Be warned, however, this set-up delivers a bone-shaking ride. As a result, if you only choose one option, make it the £300 adaptive damper set-up: this vastly improves the Audi’s ability to cope with imperfections. Without this, the car has an excessively stiff ride, causing it to crash over bumps and potholes that the lower-spec SE shrugs off.

Our choice of diesel engine would be Audi's refined and efficient 2.0 TDI in 175bhp guise. It’s not as efficient or cheap to tax as the new ultra model, but it doesn’t suffer from that car’s long gearing and sluggish throttle reponse, The preferred petrol engine for the A4 is the eager 1.8 TFSI. In addition to having an impressive 168bhp, it has claimed economy of 50mpg and CO2 emissions of 134g/km.

The mighty RS4 is incredibly fast and boasts secure handling, but it lacks the fun factor you’d expect from a high performance flagship. On the plus side, its V8 engine delivers a crackling soundtrack, while its quattro four-wheel drive system makes the RS4 a genuine supercar for all seasons.

Even better, the firm’s legendary all-wheel drive transmission system is available throughout the range. Most cars get a slick six-speed manual as standard, while Multitronic CVT and S tronic twin clutch gearboxes are available as options.

All of the engines that Audi offers in the A4 are efficient, but it's the diesels that offer the best mix of performance and economy.

For business drivers, the obvious choice is the efficient 2.0 TDI ultra model which has an official combined cycle of 67.3mpg, and emits only 109g/km of CO2.

The more powerful 175bhp 2.0 TDI still offers a decent 120g/km CO2 and more than 60mpg at the pumps, plus it performs more energetically than the sluggish Ultra.

The A4's bigger 3.0 diesel and petrol engines are much faster, but they're also more thirsty and more expensive to run. The 3.0 V6 TFSI with quattro can only manage a combined cycle of 35.0mpg and emits 190g/km of CO2. The range topping RS 4 Avant has a combined economy 26.4 mpg and emits a hefty 249g/km.

As for other ownership costs, we would recommend sticking to the lower spec cars as they offer some of the best residual values in the compact executive class, although the A4's imminent replacement means these aren't as strong as they used to be.

It's due to be replaced later this year, but the current A4 still has plenty of kerb appeal. Simple lines and smart detailing help the car stand out, while Audi’s four-ring logo has plenty of car park kudos. A mild facelift brought tweaked headlamps and tail-lights, but otherwise the handsome and well proportioned saloon has remained largely unchanged since its 2008 debut.

Inside the A4 is starting to show its age, but there’s no doubting the quality. High-grade materials are used throughout and fit and finish is flawless. And while the design of the dashboard and the graphics used for the infotainment system look old-fashioned, everything is clearly laid out, the switchgear operates with slick precision and the low-slung driving position feels perfect.

There’s also a decent amount of kit: all cars get a DAB radio, Bluetooth and three-zone climate control as standard. S line adds a number of worthwhile extras, such as part-leather trim for the sports seats and some upmarket-looking brushed aluminium inlays for the centre console and door tops.

As with all other Audis, the A4 boasts outstanding interior build quality. The firm but supportive seats offer lots of adjustment and the dashboard boasts tasteful aluminium trim and high quality soft-touch plastics. 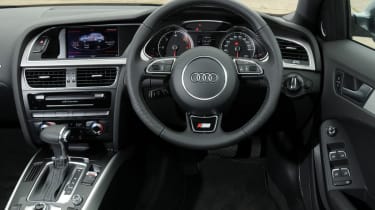 Thanks to its generous interior dimensions, two tall passengers can fit comfortably in the back of the A4 and the 480-litre boot on the saloon model matches the BMW 3 Series and Mercedes C-Class. If, however, more space is needed, the A4 Avant increases boot space to 1,430 litres - although that’s someway behind mainstream compact family rivals such as the Skoda Octavia estate and Honda Civic Tourer.

Yet while the Audi’s load bay is flat and benefits from a wide opening, it doesn’t get handy levers to fold the rear seats flat. Plus, its 60:40 split layout is less versatile than the 40:20:40 in the rival Mercedes and BMW.

It feels robustly constructed and features plenty of tried-and-tested parts, but according to our Driver Power survey the A4 flatters to deceive, with owners placing it well behind the newer BMW 3 Series and Mercedes C-Class.

Fortunately, the A4 turned in a stronger performance in the Euro NCAP crash tests, where it was awarded a five-star rating. Standard safety kit includes six airbags, stability control and tyre-pressure monitors, while £900 adaptive cruise control, £370 lane-keeping assist and £440 blind-spot monitoring are available as options. Yet you’ll have to wait for the new model if you want low-speed collision avoidance and traffic-sign recognition – both of which are available on the Mercedes and BMW now.