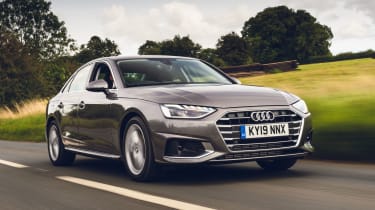 Compared to its rivals the Audi A4 feels very spacious inside. The current A4 is the same height as the last model but headroom has been improved because the seats are thinner and mounted lower. The additional wheelbase length of 23mm doesn't sound like much but it means taller passengers will feel comfortable in the back seats. The car also benefits from a wider body, which means more shoulder room.

The wide opening and low floor of the boot make it extremely useable. The Avant plays an ace though, with boot space of 505 litres – or 1,510 litres with the rear seats folded – which its rivals can’t beat.

Being based on the MLB Evo platform not only makes the A4 up to 120kg lighter than before, but also longer and wider, too. The A4 measures in at 25mm longer and 16mm wider than the previous model, while the height remains the same. The Avant version of the A4 is actually shorter than the saloon – only by 1mm, though – and 7mm taller.

Those increases in proportions unsurprisingly mean there is a lot more space inside than there was before – we’d also say the A4 is one of the most spacious cars in its class.The chunky transmission tunnel in the back remains, so it can get a little awkward trying to seat three adults comfortably. Having said that, there is a generous amount of shoulder room and head room. 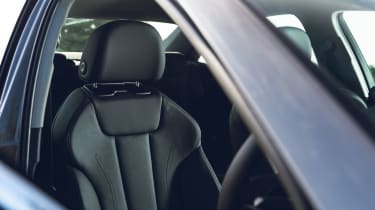 The A4 fares no better or worse when it comes to boot capacity against its closest rivals. With the rear seats in place capacity is measured at 480 litres, while folding them flat increases space to 965 litres. Naturally, the Avant is the one to go for if space is a priority, with a boot capacity that increases to as much as 1,510 litres.

The Audi A4’s range of towing capacities is relatively close-knit. Starting at a respectable 1,600kg and rising to 2,100kg, the A4 will more than cover the towing needs of the average motorist.