We drive the new Audi Q7 in the UK for the first time with sporty S Line spec and 3.0 TDI diesel power 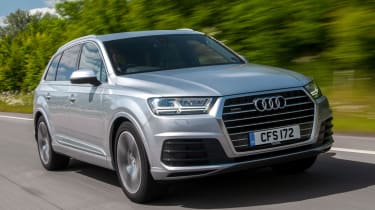 The new Audi Q7 is an impressively accomplished SUV. It’s luxurious, good to drive, comfortable and practical, and thanks to the fact it’s 325kg lighter than before, shouldn’t cost the earth to run. Spec the air suspension and the higher-power 265bhp diesel engine, and it’s a serious contender for all the car you and your family could ever need.

The Audi Q7 is the latest premium SUV to receive a total overhaul from the bottom up. Available with just one engine from launch – a 268bhp 3.0-litre TDI – we headed to the New Forest to try the new lighter, larger and faster Q7 on UK roads for the first time.

A lesser-powered 215bhp car will join the range from October, offering slightly improved emissions and economy – and a £2,350 saving on the list price, but if you can afford it this 268bhp engine compliments the Q7’s sophisticated character that little bit better. There’s barely any noise from the powerful V6 TDI diesel engine, and even when you put your foot down, it surges forward in a state of relative calm. 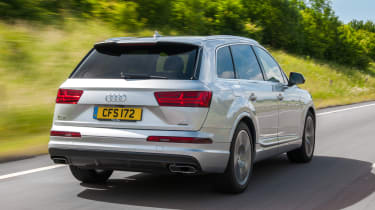 All Q7s use Audi’s trusted Quattro four-wheel drive, and our car was also fitted with the advanced four-wheel steer system. At high speeds the system turns the rear wheels in the same direction as the front wheels to boost stability. At low speeds, however, the bulky Q7 turns its front and rear wheels in opposite directions, allowing it to turn tighter than a current-generation Audi A4. It’s an expensive option though (£1,100), so unless you find manoeuvring particularly tricky, we’d put the money towards the brilliant adaptive air suspension system, which comes in at £2,000.

Do so and the Q7 feels composed in Comfort mode yet sporty and fun in Dynamic mode – makes for a truly rounded and refined driving experience. The eight-speed tiptronic gearbox works with a decent level of precision, and will swap a couple of cogs at a time if needs be. The Q7 can feel a little lethargic in Comfort mode, but keep it in Dynamic and everything sharpens up – without feeling overly spiky.

It’s near the top of the class for efficiency too. Only the four-cylinder XC90 D5 emits less CO2 (149g/km vs 153g/km for the Q7) – though adding 20-inch wheels makes no difference to the Q7’s emissions. Go for the 20s on your Volvo and you’ll jump up a tax band and match the Q7 at 28% BIK for company car drivers. 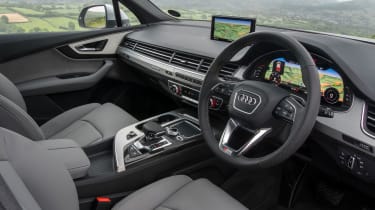 Inside, there’s a welcome jump in quality and everything feels built to last. The innovative Virtual Cockpit from the new Audi TT is a £600 option, but all cars come with clear dials and an 8.3-inch central screen. Both SE and S Line models get MMI Navigation Plus, as well as Audi Connect with wifi, maps, traffic updates and music streaming. Keyless go, a powered tailgate and parking sensors are standard across the range.

Space up front is good, and the plump leather seats offer decent support. The raised driving position offers a great view of the road, and all the buttons and switches operate with the usual Audi class.

Behind the driver and front passenger seat, you’ll find seven individual seats. The middle row slides independently to offer more or less legroom to those behind – while in the forward-most position there’s enough room for a pair of adults in the third row. Headroom is generous, and the floor isn’t too high either. 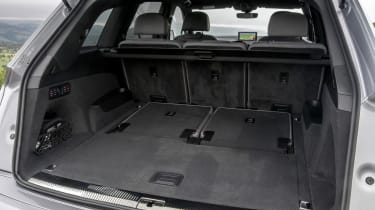 In terms of bootspace, all UK cars get an electric third row as standard. These fold both up and down at the flick of a button to reveal a 770-litre boot, which is not only bigger than the BMW X5 and new XC90, but only 23 litres shy of dedicated seven seaters like the Citroen Grand C4 Picasso. Leave the third row up and you’ll benefit from a 295-litre load area, or enough for a few small bags. Total load volume stands at 1,955 litres – or 85 litres bigger than you’ll find in an X5.

Parents will be pleased to hear that all six passenger seats come equipped with ISOFIX child seat mounts, too. Even the safety-conscious Volvo XC90 can’t claim that…