After a short break, the Audi RS 3 Sportback is back on the scene. But have WLTP regulations dampened the fun? 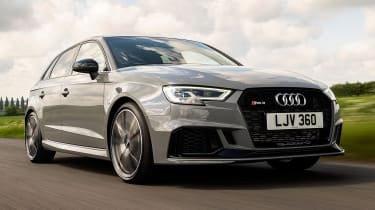 Bar the WLTP-enforced changes, the Audi RS 3 Sportback remains the same thunderous hot hatch it always was. If performance is what matters to you the most, then this is the hot hatch to get. Rivals like the BMW M2 Competition and the Honda Civic Type R edge it for fun, but it’s still got more than enough ability to put a smile on your face, thanks in no small part to the characterful five-cylinder engine. If you can stretch to the Sport Edition, the extra noise and fantastic seats are well worth the outlay.

After a brief hiatus, the Audi RS 3 is back. New WLTP regulations meant that sales had to be put on hold while the car was re-homologated, but after some emissions-based tweaking, the hottest of hot hatchbacks is ready to hit the road again.

The good news is that the necessary fettling to get it through tougher environmental standards - namely the fitment of an exhaust particulate filter - haven’t harmed the output: headline figures of 395bhp and 480Nm of torque from the 2.5-litre five-cylinder turbocharged engine are the same as before. That’s well ahead of any other performance five-door – at least until the new Mercedes-AMG A 45 makes an appearance later this year.

As a result, the performance is staggering. Engage the launch control system, and 0-62mph takes just 4.1 seconds. That’s six-tenths of a second quicker than the Volkswagen Golf R and a even a tenth under the outgoing A 45. Top speed is pegged back to the usual 155mph, though there’s an option to lift that to 174mph. But at £1,600 for something that’s almost certain to never be used, what’s the point? 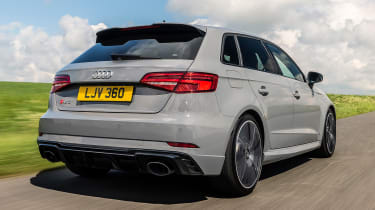 Anyway, it’s the treat the RS 3 gives your ears that sets it apart from its rivals. Sure, the Merc and the VW’s four cylinders sound angry enough, but neither will go down in history. The Audi’s five-cylinder unit, in comparison, is wonderful: a beautiful warble accompanies every flex of the right ankle, and it just gets better the more you rev it. It’s got a vibe – aurally speaking, at least – of a chilled out R8.

It’s at its best in the new Sport Edition trim, which, among other upgrades, introduces the RS Sports Exhaust. It manages to both give more of that lovely noise at high revs, and add a bassy tone to lower engine speeds. In other words, it sounds more special, more of the time.

Despite the enormous shove, on the road that performance doesn’t feel intimidating at all. The maximum torque figure spreads all the way from 1,950rpm (that’s a hundred or so revs later than pre-WLTP cars) to 5,850rpm, at which point the maximum power carries on to 7,000rpm. The smooth (yet savage), constant acceleration means that there’s no nasty surprises when getting on the throttle on the exit of a corner, but it also means that you’ll need to keep an eye on the rev counter if you’re not to accidentally butt against the limiter.

Of course the four-wheel-drive system helps with its sure-footedness, too. Even in the treacherous wet conditions of the twisting Scottish Highland roads, the RS 3 delivers almost unflappable traction, firing out of corners a pace that pretty much any other road car would struggle to match.

The introduction of the exhaust particulate filter contributes to a 25kg increase in the RS 3’s weight, but it’s not enough to fundamentally change the way it drives. And that’s a good thing: there’s plenty of scope for playing with the chassis balance both on and off the throttle. Anywhere between 50 and 100 per cent of the engine’s torque can be sent to the rear axle, which means that you can really feel the push from the back axle at times. Of course it won’t engage in the sort of lurid sideways antics of a BMW M2 Competition, nor the thrilling lift-off oversteer antics of the Honda Civic Type R, but it’s more enjoyable at its limits than the clinical Golf R. The steering is nicely weighted, too, and while there’s not much in the way of feel, it’s precise and predictable.

The exhaust changes keep the RS 3 compliant with the latest emissions regulations, and it translates to emissions of 195g/km. That puts it into the same 37 per cent BiK bracket as the M2, and with the pair both offering around 29mpg in official tests. 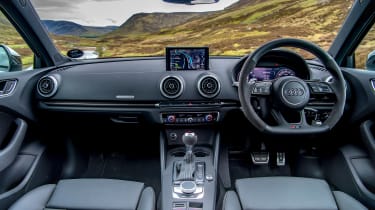 Elsewhere, the Sportback remains much the same as it did pre-WLTP, though the Sport Edition trim adds a selection of upgrades. On the outside, it’s set apart from the regular RS 3 courtesy of a black finishes for the front grille, window trims, rear diffuser and 19-inch alloy wheels. LED lights are standard, with Matrix units now an optional extra.

The cabin is treated to a set of figure-hugging sports seats, flashes of carbon fibre trim and a panoramic sunroof. The A3’s uncluttered dashboard design looks great even after all these years, but the pop-up seven-inch infotainment display is starting to feel its age. At least there’s a swanky 12.3-inch digital instrument panel to make up for it.

Prices for the RS 3 Sportback start from £46,285. Upgrading to this Sport Edition model will set you back £50,285, with the saloon alternative costing £1,000 more. The racier model might sound expensive, but the gap doesn’t seem so yawning on finance. The extra goodies make it more desirable on the used market, and the extra £1,500 of value it’ll hold as a result means that, on a four-year PCP deal, the difference between the two works out to be around £50 per month.