We get behind the wheel of the new Audi RS6 Avant, which is powered by a 552bhp twin-turbo V8 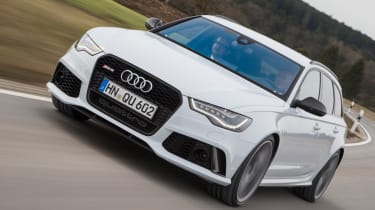 The latest RS6 may have lost some of the old car’s aural drama, but it’s much quicker and a lot more capable. The amount of grip on offer is astounding and the fact the RS6 still accelerates hard at 100mph-plus is amazing. It’s a shame the ride is so firm because otherwise this spacious estate could be the perfect family supercar.

Anything that can sprint from 0-62mph in less than four seconds is a serious performance car, in the same league as the likes of the Mercedes SLS AMG, the Ferrari FF and Lamborghini Gallardo. Adding an estate to that list might seem a bit strange – but then the latest Audi RS6 Avant is no normal car.

While its predecessor featured a naturally aspirated 5.2-litre V10 borrowed from the Gallardo, the new RS6 gets a 4.0-litre bi-turbo V8 engine. The change sees power fall by 20bhp to 552bhp – but the performance has taken a significant step up, as the new RS6 is 100kg lighter than its predecessor and has a new eight-speed automatic box.

The 3.9-second 0-62mph time is seven-tenths quicker than the previous car’s, and from behind the wheel the newcomer feels absurdly fast. Traction off the line is incredible, and there’s no doubt you would pull away from a Porsche 911 at the lights.

To slow the RS6 down just as effectively, Audi has fitted new wave design brake discs, which combine an aluminium hub with steel discs. The massive 420mm carbon ceramic brakes on our car are an option. They’re hugely powerful and offer great pedal feel, which isn’t normally a strong suit of ceramic set-ups.

Perhaps even more impressive than the traction is the Audi’s high-speed punch. Even the fastest cars in the world can feel slow when you floor the throttle at 124mph on the autobahn, but the RS6 just shifts down to sixth or seventh gear and surges forwards, seemingly unrestricted, to 189mph if you’ve specified the optional Dynamic Plus package. Do without and top speed is ‘only’ 155mph.

There’s a fantastic soundtrack to go with this supercar-rivalling pace. Stick the box in Sport mode and the exhaust growls noisily, with pops on downshifts.

“We generate that noise by burning expensive fuel,” says Stephan Reil, general manager of quattro GmbH and our passenger for this test ride, hinting that rivals take a more artificial route. There’s plenty of aural drama in the RS6, but you have to admit it’s not quite as spine-tingling as the old V10’s soundtrack.

Still, what it’s lost in the way it sounds the new RS6 has made up for it with the way it looks. Large wings in the lower air intakes and a deep front splitter emblazoned with the iconic ‘quattro’ logo mark it out as something special.

The wider track front and rear makes it look low and wide, but has other benefits. The new car feels far more surefooted than the standard A6 Avant, and its agility is only compounded by the body’s incredible torsional stiffness, plus the firm RS suspension and three-mode adaptive dampers.

It nips in and out of tight bends, with the precise steering and immediate throttle response helping you get to grips with the handling really quickly. Despite the four-wheel-drive system, if you go full throttle out of a tight bend the tail will kick out a bit – but as computers redistribute the power, you’ll soon be pointing the right way again. Five-mode air-suspension, which lowers the body by 20mm, is an option.

The traditional firmness that blights Audi’s RS models is still present in the RS6 – the 21-inch wheels on our car don’t help. It thuds and shakes on rough roads, but it’s a slight improvement over the previous version.

There’s definitely a sensible side to this superestate, though, and that comes through in its fuel economy and practicality. By fitting that lower-capacity engine and adopting cylinder deactivation, Audi has improved fuel economy by 30 per cent, to 28.8mpg. Then there’s the 565-litre boot and spacious rear seats, ensuring plenty of room for the family.

Even so, supercar-rivalling performance still comes with a price to match, and while the company hasn’t announced final figures for the UK market, the car is likely to start at just over £80,000 in dealers here. That’s a vast sum of money – but aside from Mercedes’ new E63 AMG Estate, there’s very little else on the road that combines such huge pace with family car practicality.