New Audi TT Roadster is fun to drive, with a great interior and stylish looks 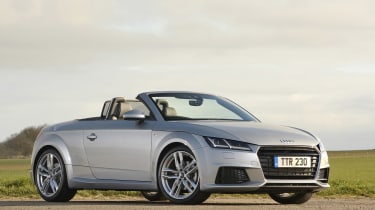 For some coupes, losing the roof compromises not only the looks but also the driving experience, but that’s not the case here. It’s fun to drive, has a beautiful interior, is great to look at and with a roof that drops in just 10 seconds, the TT allows you to enjoy the UK’s unique brand of weather. True drivers should still look towards the Porsche Boxster though, but if usability and style are higher on your priority list, then TT Roadster should be your top choice.

While the new Audi TT Coupe is definitely more of a driver’s car than its predecessor, style is still the main reason it sells. But if it’s posing point you’re after then the drop-top Roadster version scores even higher, and this is our first taste of the newcomer in the UK.

Like its Coupe brother, the Roadster is lighter, smaller, quieter, more fuel efficient and more powerful than car it replaces. The Coupe’s snug rear seats have been thrown out to make the Roadster a proper two-seater and there’s a 280 litres of room in the boot (25 litres less than the Coupe). A new boot lid and a pair of smart-looking rollover hoops complete the visual changes. 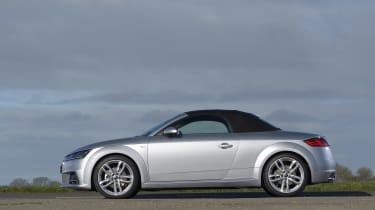 Pull a switch and the new, lighter roof folds away into a tray neatly behind the two seats as not to encroach on boot space. And to make sure the driver’s voice is heard while they’re on the phone connected via Bluetooth, a microphone is fitted in the seat belt. If the weather does turn, the roof can be shut in just 10 seconds and up to speeds of 31mph.

That three-layer fabric roof means on the move it’s a hushed place to be, with only the wing mirrors and 19-inch wheels fitted to our car generating any noticeable interference through the air. The TT’s interior is beautifully made and the 12.3-inch Virtual Cockpit screen – which can be operated almost entirely by the steering wheel-mounted buttons – makes all other dashboards seem dated by comparison. 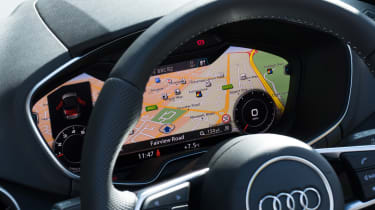 But it’s with the roof down where the Roadster looks its best. The first-generation TT was designed from the outset to be a drop-top (with the coupe following later in the designer’s sketchbook) which is why the design worked so well – and the new one carries on that trend.

Every crisply-creased panel is new and neat touches like the third brake light hidden under the boot lip are new. Classic design cues remain though, such as the TT logo embossed in the filler cap.

The TT Roadster can be ordered with a choice of petrol and diesel engines, manual and six-speed S tronic transmissions and Sport and S line trims – and there’s also a 306bhp TTS Roadster coming this summer. We got behind the wheel of the 2.0-litre TFSI petrol with 227bhp, front-wheel drive and a six-speed manual ’box in the predicted best-selling S line trim. 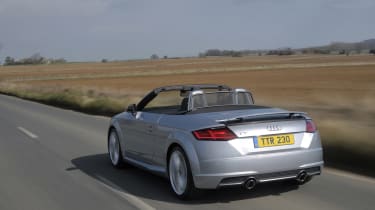 While the Roadster weighs 90kg more than the Coupe, it’s still impressively light. Thanks to the VW Group’s part-steel, part-aluminium MQB platform our car weighs just under 1,400kg. Despite the Roadster’s extra weight, there’s very little difference in how the Roadster handles over the Coupe. String together a few country bends and you’ll be having fun thanks to the agile chassis and the satisfying-feeling manual gearbox.

Just don’t expect Porsche-levels of feedback through the steering wheel; while the steering rack weights up nicely, it’s harder to place precisely in corners than a Boxster. All TT Roadsters come as standard with Audi’s Drive Select which allows you to changes the car’s characteristics – from fuel-sipping Economy which coasts along if you take your foot off the throttle, to Dynamic which sharpens the car up. 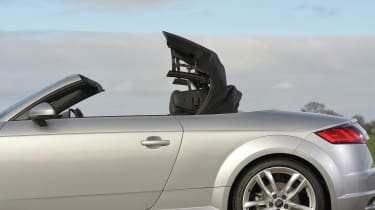 The 2.0-litre four-cylinder petrol is an impressive performer, too. While 227bhp is nothing groundbreaking in this day and age, it translates to a sharp turn of pace and with 47-plus mpg, it won’t break the bank to own. What will deplete your wallet, though, is the options list.

S line cars come as standard with fantastic LED headlights, 19-inch wheels, front sports seats with four-way electric lumbar and leather and alcantara upholstery, but still our test car came in at £54,000. We’d tick the box for Mercedes SLK-like air vents in the headrests and an electric wind deflector (for £1,695) but not much else – do this and it’s everything a sports car should be – great looking, sharp to drive and guaranteed to put a smile on your face.