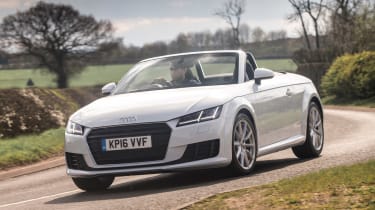 Despite being the entry-point into TT ownership, there’s nothing basic about this new 1.8 TFSI Audi TT Roadster. It drives beautifully, looks great, and has enough power to satisfy most requirements. It’s a nicely rounded package, and makes even recently refreshed rivals like the Mercedes SLC look incredibly out-of-date. A worthy addition to the TT range.

The TT Roadster launched last year with a 227bhp 2.0-litre petrol engine and a fast but frugal TDI diesel. Now, though, Audi has sliced £3,000 from the price of its drop-top sports car and launched this – a new 1.8 TFSI turbo.

Priced from £28,915, the new engine marks a fresh entry-point into TT Roadster ownership. It’s available in Sport or S Line spec and you can have a fixed-roof coupe, too. All cars come with the brilliant Virtual Cockpit digital display, xenon headlamps and 18-inch alloy wheels. Cosmetically, though, it’s identical to its more powerful siblings. 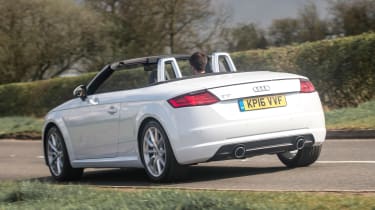 Under the bonnet, this TT 180 gets the 1.8-litre turbocharged petrol engine from the SEAT Leon FR. It sprints from 0-62mph in a respectable 7.2 seconds, and can hit 147mph flat out – meaning while it never feels fast, there’s more than enough grunt to put a smile on your face.

In fact, it’s easy to forget quite how good the TT Roadster is to drive. Even in front-wheel drive format, there’s loads of grip – and thanks to the sharp, reactive steering, the front-end handling is remarkably predictable.

The 180 feels light and playful on its feet, but lacks the sportier sound of the larger capacity 2.0-litre engine. The manual gearbox is a joy to use, though you don’t get the same dramatic soundtrack on full-bore upshifts that makes the slick auto so entertaining. It’s a small complaint, however, and does little to detract from this compelling package. 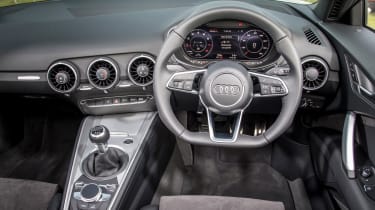 Inside, it’s business as usual, with a class-leading interior that makes cars like the new Mercedes SLC look old hat. The standard-fit part-leather seats are comfortable and supportive and the driving position is spot on. As with other TTs, you can lower the roof at speeds of up to 31mph – meaning you can enjoy the delights of British summer in just 10 seconds flat.

Fuel economy is competitive, too. The Roadster will return 46.3mpg and emit 142g/km of CO2. While that’s some way off the TDI Ultra, it’s marginally better than the larger 2.0-litre petrol and almost 5mpg more than you’ll manage in a BMW Z4 sDrive18i. The TT is £780 cheaper, too.