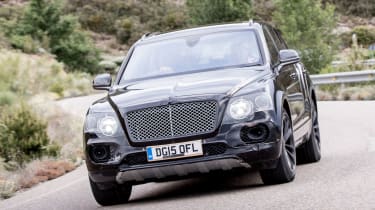 It’s not the finished article, but on the basis of this early prototype drive the Bentayga establishes itself pretty effectively as the first luxury SUV. Effortless pace, a lavish cabin and composure which belies its size show real promise for a controversial new arrival.

It costs upwards of £140,000 with a twin-turbo W12 engine which will propel it to over 170mph, and its cabin is sheathed with the hides of several German bulls. Yet, it’ll get down and dirty with the best of the world’s four-wheel-drive vehicles.

This is the new Bentley Bentayga, the world’s first luxury SUV, and we’ve been behind the wheel for a prototype test drive. It can’t claim the title of world’s only luxury SUV for long, though, because Rolls-Royce is developing one, and so, too, is Lamborghini with the Urus. 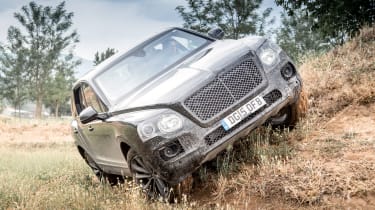 The Bentayga started life as the EXP 9 F concept, which created a storm of controversy when it was revealed at the Geneva Motor Show in 2012. Bentley heard the criticism, but also the enthusiasm of potential customers, and critics, for the idea of a Bentley SUV, which would be a civilised, all-purpose off-roader more luxurious than a Range Rover, and swifter than a Porsche Cayenne.

And it certainly doesn’t disappoint. Inside, it’s furnished with high-grade leather, deep polished wood and sumptuous carpet. While that sounds less than ideal for wading through deep mud or rock-climbing, be assured that underneath the Bentayga’s body beats the heart of a pure off-roader. 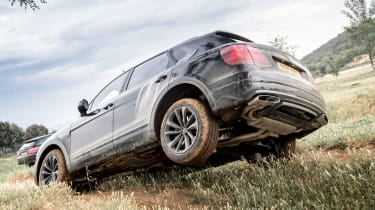 There’s height-adjustable air-suspension and a Land Rover-style rotary terrain selector knob which can adjust 19 parameters to maximise its off-road agility. There’s also more power than you’re ever likely to need – as we discovered while driving a Bentayga prototype among rugged mountains in Spain.

• Rolls-Royce Cullinan SUV on the way

According to Bentley’s product line director, Peter Guest, the Bentayga “is a 21st century grand tourer. It will be at home in Kensington as much as in the Atacama Desert”. On rough tracks you wouldn’t even think of tackling in a Bentley Flying Spur, the Bentayga is smoother than most SUVs. 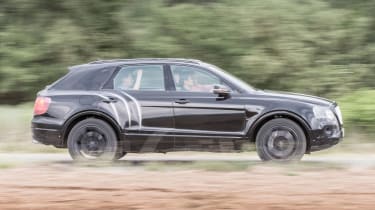 There’s a bit of slither from the wheels as the Bentayga quickly gets a grip and climbs along the rain-soaked earth bank, but as we point the Bentley up a steep gradient littered with rocks and shining with rain, the big car climbs without a fuss. It eases its way towards the top with a swinging tail as the tyres claw for grip, but it gets there, and with no frantic revving or scrabbling of wheels.

Forget the tail-slide – watching this beast grappling a rock slope is as impressive as seeing a grizzly bear climb a tree. While Bentley is quick to admit that the Bentayga doesn’t quite have the agility of a Range Rover, it’s hard to imagine most owners off-roading a Bentayga like an ageing Defender. 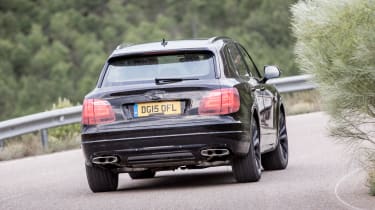 Underpinning its off-road prowess is the considerable power of a brand new W12 engine, which shares nothing with Bentley’s current one beyond its unusual cylinder layout and the odd bolt. Improved efficiency also fattens the 6.0-litre’s muscle.

Bentley claims the Bentayga is capable of more than 543bhp of power and over 720Nm of torque, channelled to all four wheels via an eight-speed automatic transmission. What this also provides is performance, and plenty of it.

Besides that 170mph-plus top speed, the Bentayga will slingshot from 0-62mph in under five seconds, a mighty achievement for a car so large, and it feels every bit as quick as Bentley says it is. 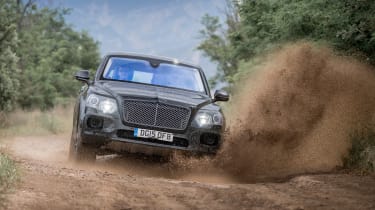 Most of the Bentayga’s body is made from weight-saving aluminium, like the new Audi Q7 to which it’s related. A lower centre of gravity is another benefit, and you can feel it on the road. Quick-acting, precise steering reduces the intimidation factor of driving a vehicle so big and tall, and so does the Bentley’s willingness to dive into corners with the enthusiasm of a small car. It’s not as nimble as a GTi, obviously, but it’s wieldy enough that you’ll enjoy stretching its air springs through fast and slow corners.

So, it goes hard, it off-roads and shrugs off most bends, but what about the practicalities? It goes without saying that there’s plenty of space in the front and rear. Plus, you can choose from different seating layouts, including two individual rear seats with a centre console; a rear bench with a folding backrest or five seats, plus an occasional pair in the rear. 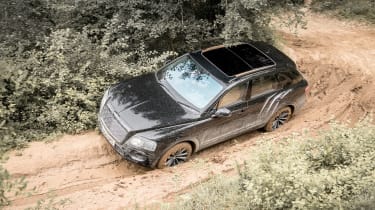 It appears the bar has been set fairly high for the onslaught of luxury SUVs that’s sure to follow in the Bentayga’s footsteps.