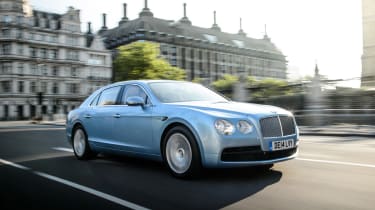 The Bentley Flying Spur V8 would be an excellent limousine if you could ignore the W12-powered version that sits just above it in the range. It’s a shame to miss out on the supersonic performance of the bigger engine when there’s not enough of a difference in economy or price to justify it – especially for buyers with this kind of money to spend.

The new Bentley Flying Spur is already an impressive luxury limousine, but now UK buyers can opt to ditch the 6.0-litre W12 in favour of a twin-turbo 4.0-litre V8 for the first time. It’s the same engine found in the Continental GT, where it’s our pick of the range, so does the same apply to the Flying Spur?

Plant your right foot and V8 responds obediently, with its twin figure-of-eight exhausts bellowing as the permanent all-wheel drive system bites into the road and the Flying Spur hurries off at quite an alarming rate for a two-and-a-half tonne car. Drive the V8 back-to-back with the W12 and you’ll be slightly disappointed, though. Where the eight-cylinder feels fast, the twelve-cylinder feels absolutely supersonic.

On the flip side, the V8 is significantly more efficient. CO2 emissions fall from an obscene 343g/km to a less shameful 254g/km while fuel economy rises from 19.0mpg to 25.9mpg. 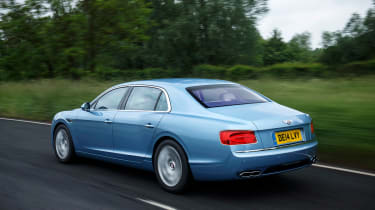 You may be thinking someone who can afford a £136,000 limousine, or £165,230 for our test car with all its options, wouldn’t give up four-cylinders for a 6mpg saving. But in the V8 you can go 520 miles before having to pull over and fill up, whereas with the W12 you’d be stopping every 376 miles. And if you’re a financier you’ll have done the maths and worked out this means having to rub shoulders with riff raff at the petrol station almost a third less.

However, with that kind of attention to detail you’ll also have worked out that the £10,000 saving you get by opting for the V8 over the W12, is effectively knocked down to £3,000 if you want to specify it to a similar level. That’s because the W12 comes as standard with a few things – like a plusher rear seat set-up, which includes heating for the outer chairs – that aren’t fitted as standard to the V8.

Aside from the differences in standard equipment there’s very little to differentiate the two cars but you can spot them out on the road if you look carefully. As with the Continental GT, the V8-powered models are marked out by Bentley badges that sit on a red background and get a set of figure-of-eight exhausts where the W12 gets large oval outlets.

The V8 weighs in at around 30kg lighter overall than the W12 but that’s really not a sufficient enough margin to bring any discernible handling gains on the road. That’s why Bentley has made no changes to the suspension, which means that while the ride is very smooth, the adjustable air suspension still lacks that final layer of polish that you get with a Mercedes S-Class. 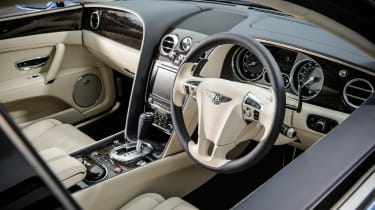 And if we’re being honest the Mercedes is actually a better car. But that doesn’t necessarily dilute any of the Flying Spur’s charm. It may not feature the very latest active safety systems – and the sluggish touch screen in the Flying Spur feels as old-fashioned as building cars by hand – but it’s exactly that bespoke, hand-crafted feel that justifies you paying extra.

Indeed, the Spur’s enigmatic charm means you are willing to overlook some of the ergonomic flaws like the awkwardly positioned paddle shifters for the gearbox (no matter though as the eight-speeder is just perfect in auto mode) and how some of the switches feel a little bit cheap (but that’s next to the hand crafted wood veneers, lashing of soft leather and thick carpets). Thing is though, lovely as the V8 is, the W12 is an even more special machine for a premium which is of little consequence to anyone who can afford such a car in the first place.