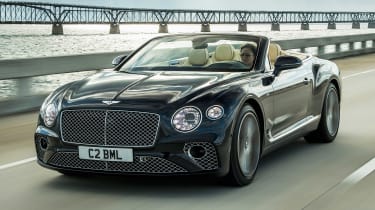 With V8 power, the Bentley Continental GT Convertible is a beautifully executed piece of engineering that delivers exactly what a car of this type should. It’s so comfortable and so characterful thanks to that engine, which delivers more than enough performance. Technology and craftsmanship combine in equal measure to deliver something very special that drips with elegance and desirability in almost every way.

The recipe is not a hard one to comprehend. Bentley has delivered coupé and convertible versions of its range-topping W12 Continental GT, but so far we’ve only sampled the hard-top version of its V8 version in the UK – and loved it. Now, though, it’s time for the Continental GT Convertible with the brand’s V8.

The results of this recipe are easy to understand, too, because the Bentley Continental GT Convertible V8 is sublime – and for many reasons.

We’ll start with how it drives, which is as good a place as any for the most sporting Bentley drop-top on offer. In Comfort mode the ride is gloriously cushioned by the standard three-chamber air-suspension set-up. Only the really worst potholes send the structure shuddering, and given how big the void is with the roof folded down, there’s very limited shake through the chassis, and no trim rattles in the cabin. 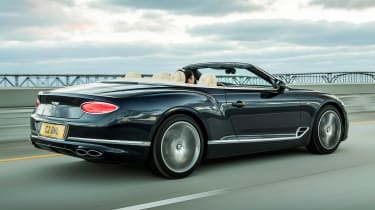 The GT Convertible is delightfully comfortable and glides over the road, then, but given its size and weight, at nearly five metres long and 2,335kg, the Bentley handles nicely, too.

Sport mode tautens up the chassis, while Bentley mode boots up the settings the company’s engineers think best for the engine, gearbox, steering and suspension. Who’s to argue with them? Because the GT Convertible carves assuredly through long corners at higher speeds.

It’s not a car for tight, narrow roads, but it still shrugs off its bulk relatively well and changes direction quicker than you’d expect. With four-wheel drive, traction is superb, too.

Combined with the 542bhp 4.0-litre twin-turbo V8 and an eight-speed dual-clutch automatic gearbox with launch control, the Bentley will accelerate from 0-60mph in four seconds flat and on to a top speed of 198mph.

It’s the engine’s 770Nm of torque that’s most impressive, though. This low-down swell of performance comes from below 2,000rpm, peaks, and then is sustained until 4,500rpm. 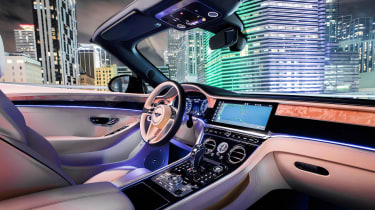 What it means is there’s massive flexibility, and you rarely have to work hard to access the performance. It propels the Bentley with ease and serenity, and with the roof down there’s a lovely deep, rich V8 burble from the quad exhausts. On the overrun, Sport mode adds a few subtle pops and rumbles, which are amplified with the roof down.

It takes 19 seconds to raise or lower the top electrically, and it can be operated on the move at up to 30mph. With it down there’s not much turbulence even travelling at speed, while the neck warmers blowing hot air onto the nape of your neck and the heated seats keep any chill at bay.

With the acoustically insulated roof up, combined with double-glazing, the cabin is extremely refined, with only a very slight wind whistle around the roof seals.

It sets the tone for the interior, which bring us to quality. The build and finish are exquisite. From the wood veneers to the quilted leather and the interior brightwork, every area of the Convertible’s cabin oozes craftsmanship. Bentley’s traditional organ stop air-vent controls embody this, and their oily-slick action is very satisfying. 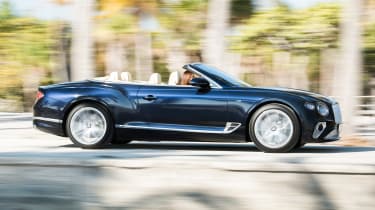 These old-school cues are mixed with modern tech, because the 12.3-inch infotainment system and digital dash are bang up to date. Nav, CarPlay and Android Auto and lots of other kit are included. The screen is relatively quick to respond and the interface is clean and intuitive. Maybe the centre console is a bit button-heavy, but it’s because there are so many features, and you get used to the layout quickly anyway.

Money does come into the equation, though, because the Continental GT Convertible V8 costs £167,000. That’s a lot, but is actually £9,000 less than the W12 version for no real discernible difference in straight-line performance or comfort, but sweeter handling and a more characterful engine.

We’d stop short of saying it’s a bargain Bentley, but it’s the one to go for if you’re in the market for a large, luxurious convertible at this price point.