The new Bentley Flying Spur aims to both excite and indulge owners, so we went to find out whether it succeeds on both fronts...

If such a thing as a money-no-object all-rounder exists, the Bentley Flying Spur is it. This is a car that is supremely comfortable and refined one moment, but exciting and phenomenally fast the next. Throw in the beautiful, endlessly customisable interior finish, the spacious cabin and in-car entertainment, and there’s little it doesn’t excel at.

It’s odd, isn’t it? Budget £50,000 for the ultimate all-round car and you’re spoiled for choice. Spend four times as much, however, and most options are so focussed on one task that every other is compromised.

You can buy a luxury limousine – beautifully refined, but not much cop on a twisty road; or you can get a supercar – guaranteed to put a smile on your face, but easy to live with every day? Not really.

The new Bentley Flying Spur is perhaps a rare exception. This is a 207mph super saloon that its maker reckons will excite and indulge in equal measure – and on our encounter, it's hard to think of a car on sale today with a broader spread of abilities. The third model to bear the Flying Spur nameplate in modern times (following on from the original S2 Continental Flying Spur from 1959) has taken a big step forward over the previous model.

Let’s start with the styling, which, though familiar, turns the old Flying Spur into something with a similar level of grace, but altogether more imposing. The crisp lines along the flanks, plus a wheelbase stretched by 130mm, add extra muscle.

Then there’s the detailing. Close-up, the jewel-like Matrix LED headlights look stunning, while those at the back give off a sharp B-shaped lighting signature. Then there’s the new retractable ‘Flying B’ adorning the bonnet, which can be fitted with 23 crystal ‘feathers’ in its wings if so desired. Arch-filling 21-inch wheels are standard; 22-inch items are optional.

Inside, all is familiar; the new centre console and air vents aside, the dashboard design is lifted straight from the Continental GT. That’s no bad thing though, because this must be one of the finest interiors fitted to any new car on sale today. Chromed organ stop controls for the air vents look delicate yet feel sturdy, the knurled driving select dial rotates with a near-mechanical ‘thunk’, and the three-dimensional quilted leather reinforces the feeling of attention to detail turned to every surface. 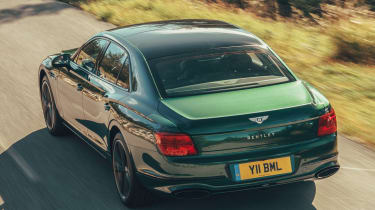 The rotating display is the cabin’s centrepiece: a triangular unit that silently twirls to show either a 12.3-inch touchscreen infotainment system; three analogue readouts comprising a thermometer, a compass and a stopwatch; or a panel that seamlessly blends into the wood veneer on the dash. If there’s one minor criticism inside, it’s that the customisable digital instrument panel doesn’t look as sharp as similar systems from other brands.

Move into the back, and the gloriously comfortable seats – electrically adjustable, naturally – give access to the Bentley rear-seat entertainment system. This adds a pair of Android-powered tablets to the rear of each front seat, giving access to web browsing, movies and music. There’s also a touchscreen remote for those in the back, allowing occupants to adjust climate control settings, monitor their driver’s speed and, in a fun (yet slightly juvenile) addition, to reveal or conceal that Flying B on the bonnet.

Hop into the front, breathe in the lovely surroundings again, and even after pushing the starter button you’d be forgiven for thinking the engine hadn’t fired. It really is that quiet. A similar theme continues as you gather speed; on a motorway cruise, the most audible sound comes from the whirring fans inside the ventilated seats. Despite the tyres measuring up to 315mm wide at the rear, road noise is a distant hum. 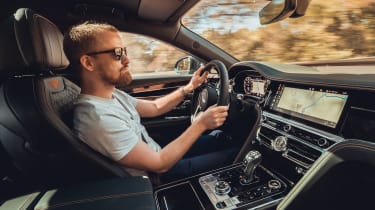 Ride comfort is controlled via a three-stage air suspension set-up and Bentley Dynamic Ride System – the latter comprising an active anti-roll bar that keeps the body level when cornering. In Comfort mode it means that the Flying Spur smothers almost any road imperfections a broken surface can throw at it.

Rotate the drive mode dial to Sport, and the body starts to jiggle about slightly, but it also lets the Flying Spur corner in a way which no two-and-a-half tonne limousine has any right to. Four-wheel steering appears for the first time on a Bentley, helping to mask at least some of the mass at speed, as well as its length during low-speed manoeuvres. The steering hasn’t much feel, but the pleasing weight of response seems appropriate for such a substantial car. The best compromise is Bentley mode though, which strikes a great balance between Sport and Comfort.

The Flying Spur turns in more keenly than the old car thanks in part to the relocated front axle, which means the engine is now mostly behind the front wheels. The new rear-biased four-wheel-drive system helps, too; unlike the old Flying Spur, which had a 60:40 power split front to rear, the new one only sends power forwards when slip is detected. 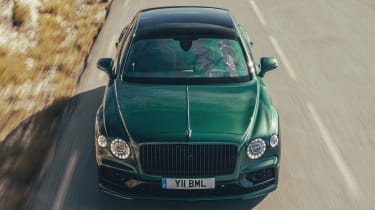 But traction is hard to break, despite the engine’s best efforts. Power comes from a twin-turbocharged 6.0-litre W12, which makes 626bhp and a staggering 900Nm of torque from just 1,350rpm. Jab the throttle, and the previously silent motor releases a tuneful growl – somewhere between the high pitched wail of a Ferrari and the bassy thunder of an Aston Martin V12. Get over the slight turbo lag, and the 3.8-second 0-62mph time is completely believable. The eight-speed auto gearbox, meanwhile, responds quickly enough in manual mode, and is near-imperceptible the rest of the time.

While the W12 is the single engine choice at launch, a V8 is likely to join the range later. As will a plug-in hybrid, as the brand aims to introduce an electrified version of every car it sells before the end of 2022.

So is it worth considering over its rivals? Absolutely. The Rolls Royce Ghost just edges it for outright refinement, but the Bentley is by far the sharper car to drive. You could consider a Mercedes-Maybach S 600 a rival but, as accomplished as it is, it can’t offer the same sense of occasion. Then again, little else does.