A budget of £15k will get you a good new car, but it could land you a brilliant used one. Here are the best used cars in that bracket 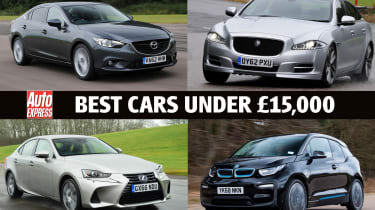 With £15,000 to spend on a car, you only really have two choices: head to the nearest showroom and buy yourself a new car, or opt for the slightly less predictable but potentially very rewarding used car market. To help you if you decided to go for the latter, we've rounded up the best used cars you can buy for £15k.

While a new car should give you refined performance, great economy and unbeatable reliability, a used one can also do much the same while making your money go that little bit further as well. Thanks to the wonder that is depreciation, you might find that out-of-reach new models become attainable if you’re willing to consider an older, second-hand alternative.

If you'd rather have a more future-thinking car, the BMW i3 still looks modern and offers a range which is still competitive with new electric cars.

A test drive and full inspection are a necessity with any kind of car, but especially so when you’re forking out up to £15,000 on one that has been in the care of another motorist. A clean service history and visible efforts to maintain a car are always good signs, but always exercise caution if a deal seems too good to be true.

Scroll down to read more about our half-price heroes - all of which can be bought for less than £15,000 - or alternatively discover what's out there in these other price brackets... 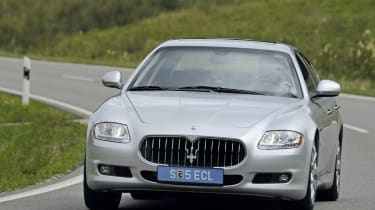 A left-field choice new, the Quattroporte is a top used buy. It lacks the polish of hot versions of the Mercedes E and S-Class, plus BMW’s M5, but it’s full of character.

Power comes from a sonorous 395bhp 4.2-litre V8, and while the outmoded automated manual gearbox stunts performance, the car is still fun. The ride is a bit jittery, but the trade-off is sharp, agile handling that belies the Maserati’s size. Just be prepared for big bills.

Another sensible used buy, Audi’s A6 is a solid, refined and comfortable executive saloon with bags of space; in 2.0 TDI Ultra guise, it’s powerful and economical, too.

‘Ultra’ was Audi’s eco-friendly branding and here it signals that there’s more power on tap over a standard TDI, but also reduced emissions and improved economy. The official claim of 65.7mpg may prove hard to match, but efficiency figures in the fifties are realistic.

Elsewhere, the A6 is still a fine buy. Few cars on our list are better suited to covering motorway miles in comfort. 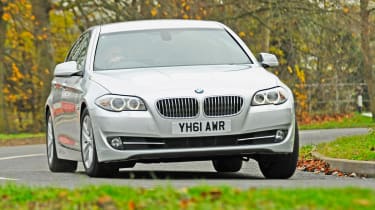 The unassuming BMW 520d is undoubtedly one of the great all-rounders of the automotive world. Quick, frugal, practical and even fairly fun to drive given its size, this executive saloon really has all of the bases covered.

There are more powerful options in the 5 Series range but for most people, this 187bhp 2.0-litre diesel is more than adequate. It sprints from 0-62mph in 7.9 seconds, yet BMW also claimed 68.9mpg; you should easily see 50mpg-plus on the motorway. Throw in a chassis that mixes sharp handling with a smooth ride – especially on the SE’s modest 17-inch rims – and there’s little the 520d can’t do.

It’s a huge chunk of car for the cash, too. SE models present a good balance between price and equipment, and come with heated leather seats, cruise control and Bluetooth. 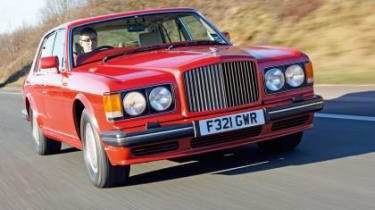 If you’ve got a sense of style – or just a sense of humour – there are few more opulent ways to spend £13,000 or so than on an old-school Bentley. The legendary 6.75-litre turbo V8 delivers a politely forceful shove along with a lovely, muted rumble.

Of course, some buyers may wince at the thought of running and servicing such a car. But keep a Turbo R in good nick and it shouldn’t drop below its current price. 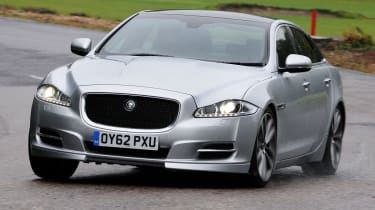 The XJ might not be the obvious option for luxury car buyers, but there’s much to recommend it. For those who enjoy driving as much as sitting in the sumptuous rear and being chauffeured round, the Jaguar leads the class for handling. It feels at least as agile as many cars from the sector below.

It’s refined and relaxed, too. The 3.0-litre diesel is smooth, and a huge fuel tank makes this a great long-distance machine. A relative lack of cosmetic updates means used cars still look contemporary 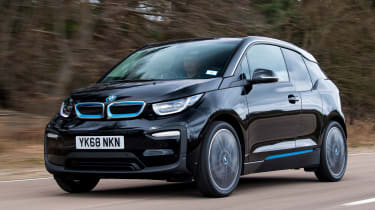 With many early adopters of electric cars suffering from range anxiety, wondering if they’d have enough charge to reach the next plug, BMW’s groundbreaking i3 Rex offered a tempting compromise.

A small twin-cylinder engine from the brand’s motorcycle division backs up the 22kWh battery, allowing almost double the original i3’s range. This is perfect if you occasionally need to do longer journeys, yet allows for zero-emissions progress in town. The i3 has the space-age looks to back up the powertrain, boasting a highly stylish and premium cabin. 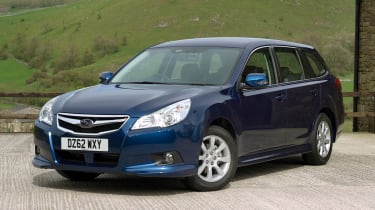 If you’re after a sensible, no-nonsense estate, it’s hard to overlook the Subaru Legacy. The dependable wagon mixes plenty of cabin space with a roomy 526-litre boot. Folding the rear seats expands the load bay to 1,726 litres, leaving enough room for dogs or even more kit.

A mere £13,000 is enough to bag a clean 63-plater that’s barely run in, with 21,000 miles. Even better, this car is loaded with kit; leather seats, cruise control and an aux input for smartphones are all included on SE models.

The Lexus IS takes a different approach to its competitors in the compact executive class. The sharply styled saloon makes use of an electric motor teamed with a 2.5-litre petrol engine to boost fuel economy. Thanks to its low emissions, tax bills come to a mere £10 per year.

The downside to the hi-tech powertrain is that it doesn’t offer quite the driving fun of some rivals, but nevertheless, the model is a fairly relaxing place to while away the miles. It’s helped in no small part by the well-built interior, which is at least as solidly screwed together as any of the more predictable German offerings. Also, Lexus’s legendary reliability means you can buy a used car with confidence. 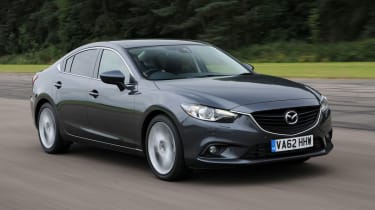 The Mazda 6 is often overlooked among a group of rivals that includes the Ford Mondeo and Volkswagen Passat. That’s a shame, because it has bags of appeal for a business user. The handsome styling is complemented by a well-built (and, in Sport Nav trim, well-equipped) interior that puts many competitors to shame – even if it’s not quite as spacious as a Skoda Superb.

It’s better to drive, though, delivering solid motorway comfort along with steering and a chassis balance that are fun to exploit. The 2.2-litre diesel is smooth and fairly frugal, and teamed with a slick six-speed manual gearbox, the powertrain is fairly sweet.