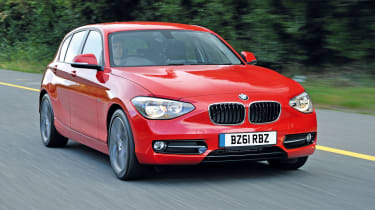 The launch of the new 1 Series marks the arrival of some great new turbo petrol engines, but diesels will be the top sellers in the UK – and the 118d is the pick of the line-up. It’s as economical as the 116d (at least until the tax-free EfficientDynamics version arrives next year), yet provides great performance and costs £1,450 less than the 120d. Go for the Sport trim, which comes very well equipped and looks far more classy than the Urban model.

Get used to seeing the new BMW 118d Sport – it’s set to be one of the most popular 1 Series models on the road. Sitting in the middle of the diesel range, it mixes hot hatch-like performance with CO2 emissions of only 118g/km and fuel economy of 60mpg, so it will appeal to company car drivers and private owners alike.
It certainly looks the part. In addition to regular ES and SE versions, two new trims are available: Sport and Urban. Sport trim brings a lowered suspension set-up, which complements the classy 17-inch five-spoke alloys.
Video: watch CarBuyer's video review of the BMW 1 Series

[[{"type":"media","view_mode":"content_narrow","fid":"69339","attributes":{"alt":"","class":"media-image"}}]]
A high-gloss black finish is applied to the kidney grille and other air intakes, and the same material is used to mark out the rear of the car. All of this is subtle, and far classier than the alternative Urban spec, which
features opinion-dividing white wheels with matching white trim for the wing mirrors and grille.
The feelgood factor continues inside. Although a leather interior costs a lot more, the Sport’s cloth seats are some of the best around – and they’re sportier than those fitted to lesser versions of the 1 Series.
Buyers can stick with subtle grey colours here or, for no extra cost, go for Coral Red stitching and detailing throughout. It’s no lipstick red throwback to the eighties, either; this is a rich ruby colour. That’s just as well, as BMW has improved the rest of the interior. It’s higher quality than before, and although it’s not very spacious in the back, a longer wheelbase does mean there is more room for adults.
The Sport model comes with iDrive as standard, along with an expensive-looking 6.5-inch flatscreen display on the dashboard. But it’s the Drive Performance Control button that gets our attention. It’s found in all versions of the 1 Series and allows the driver to switch between four different driving modes from the default Comfort setting to Sport and Sport+.
The most interesting is Eco Pro, which maximises efficiency in a number of ways, including softening throttle response to encourage more economical driving. A readout on the dash shows owners how many extra miles they’re getting from the tank through sensible driving.
On-screen gearshift instructions – which tell you the most efficient time to change up – plus standard stop-start will get you surprisingly close to the 118d’s official economy figure of 62.8mpg.
That’s the same figure BMW quotes for the 116d, although the 118d is significantly more powerful. With 141bhp, it’s very smooth and likes to rev, boasting a rapid 0-62mph time of 8.9 seconds. However, the in-gear acceleration is even more impressive. The 320Nm maximum torque figure is produced as low as 1,750rpm, so there’s no need to bother the upper reaches of the rev range to maintain good pace.
You can simply put the 118d in a higher gear and still overtake slower traffic with ease. As you’d hope with a BMW, the 118d is great fun to drive on a twisty road.  The Sport model is a little firmer than the SE version, but it’s considerably more grown-up and refined than its predecessor. It rides with real composure now, while stability and body control are rock solid.
You can opt for the M Sport suspension if you want to go sportier still, and BMW will also happily sell you adaptive damping. We don’t think the 118d needs either of those.
Thankfully, BMW is persisting with the rear-wheel-drive layout, as it sets the car apart in this class and means the steering is full of feel and the car is engaging to drive. In time, there will be racier versions of the 1 Series – but for now, we’d settle for the highly accomplished 118d, especially in Sport guise.
Share this on TwitterShare this on FacebookEmail