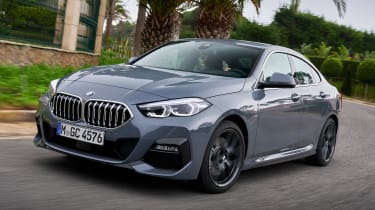 Not long ago, the idea of a four-door coupe was something of an anomaly. But increasingly this formula is appealing to young, upwardly mobile types who more often than not haven’t yet had kids. And the BMW 2 Series Gran Coupe is the very latest one, filing yet another niche in the German brand’s ever-expanding model range.

It’s based on the regular front-wheel-drive platform of the new 1 Series and 2 Series, and adds an extra hit of style plus sharper but more refined driving dynamics, according to BMW, while also providing a bigger boot than its hatchback cousins. In 220d form, as tested here, it costs from £31,355 and is powered by a 2.0-litre, four-cylinder turbodiesel engine that develops 187bhp and an impressive 400Nm of torque. That’s enough to send the front-driven 220d from 0-62mph in a respectable 7.5 seconds and to a top speed of 146mph, while at the same time providing a theoretical 56.5mpg on the combined cycle and CO2 emissions 131g/km.

So that means the BMW’s vital statistics are highly competitive beside the car’s main rival, the Mercedes CLA 220d. 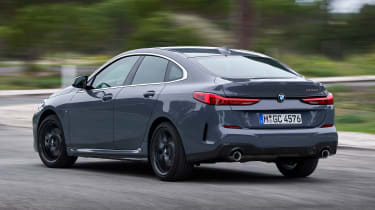 All Gran Coupe models come as standard in Sport trim, but for an additional £2,500 you can specify the M Sport trim, and that’s the car you see here. For this you get larger 18-inch M alloys (the standard Sport has 17s), BMW’s Cockpit Pro system – which benefits from a bigger 10.25-inch central touchscreen display and the OS 7 version of BMW’s iDrive system – Dakota leather upholstery rather than cloth, M Sport door sill finishes, extended interior lighting, an M Sport gearlever and various bits of M Sport body addenda, including a different front and rear bumper design.

Vitally, you also get BMW’s M Sport steering and stiffer suspension, which means sharper responses not just at your fingertips but beneath your backside as well. So it’s hardly surprising that BMW UK claims most buyers will go for the M Sport version. By comparison the Mercedes CLA 220d AMG Line costs £35,475 and comes with no more standard equipment than the BMW and only a whisker more performance, making the 220d M Sport look like decent value at £33,895.

The interior is much the same as the 1 Series’, and there’s nothing wrong with that. The main TFT instrument display is excellent and intuitive to use, the cabin design is typically driver-orientated, the Dakota leather of the M Sport we drove is high in quality and even quite pleasant on the nose. It’s certainly one of the most pleasant and agreeable cabins in this segment – everything simply looks and works as you’d expect it to. 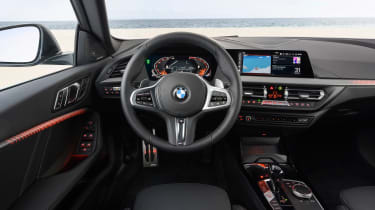 In the back there’s just about enough room for a six-footer to sit behind another six-footer, plus a well shaped 430-litre boot that provides more space than you get in a 1 Series. In fact, the larger 3 Series only has a 50-litre advantage over the Gran Coupe when it comes to ultimate carrying capacity. On this evidence, then, there’s certainly enough going for the 2 Series to allow it to qualify as a sensible family car.

BMW says it has softened the Gran Coupe’s chassis a touch to give the car a more refined drive when compared with the 1 Series, and that’s exactly how it feels on the road.

It’s not what you’d call soft, but the Gran Coupe does feel like it glides with more serenity than the regular hatchback, with arguably more feel through its steering and a good sense of balance mid-corner. If you weren’t told, you’d never guess that it was front-wheel drive, such are the composure and refinement from the steering and suspension. The brakes are also strong and deliver good feel through the pedal.

The engine isn’t the most tuneful, it must be said, but then turbodiesels rarely are. Instead it’s an efficient, effective, refined and ultimately fairly soulless power unit, but one that suffers from almost no lag and delivers strong acceleration from as little as 1,800rpm. The gearbox is the same eight-speed ZF auto you get in anything from a 1 Series to an 8 Series, and in this case it works typically well, with smooth, effortless changes up and down the ratios. 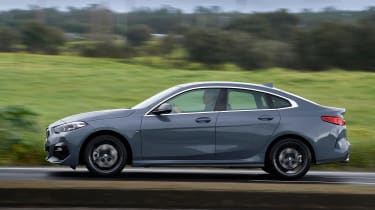 If diesel isn’t your thing, which is becoming an increasingly common theme among UK car buyers, a 218i is also available. It has a punchy 1.5-litre three-cylinder turbo petrol that kicks out 138bhp. And above that sits the flagship M235i xDrive model that uses a 302bhp 2.0-litre turbo – the only model in the range that delivers a sub-five-second 0-62mph time.

Assuming you don’t mind the looks – some people seem to like it, some don’t, although the M Sport touches definitely lift it visually overall – there is much to like about BMW’s latest offering.

The standout elements are the interior, the level of technology on offer, and the chassis. Where the overall package is let down is the engine, but the raw numbers and the performance it provides are hard to argue against. The Gran Coupe is a good car from BMW, but not a great one.

Four-door coupes are becoming increasingly popular, and the 2 Series Gran Coupe is a welcome addition to BMW’s burgeoning ranks, especially in 220d form. Using the company’s front-drive platform and potent four-cylinder diesel, the Gran Coupe does a good job of providing the 2 Series with an extra dose of style, strong dynamics and, for BMW, a generous level of equipment beside its most obvious rival from Mercedes, the CLA 220d. It’s also surprisingly spacious inside, considering the format.