Diesel models are superbly efficient and economical, but the petrols aren't too far behind 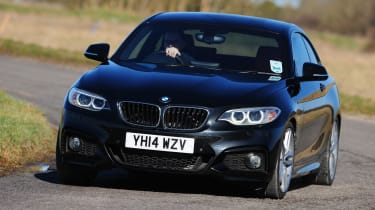 The big-sellers in the UK will be the diesel-powered 2 Series models and that’s partly down to their low running costs. The 218d is cheapest of the bunch, boasting economy under the latest WLTP test system of up to 52.3mpg and CO2 emissions as low as 120g/km, although this will change if you upgrade to larger wheel sizes from the options list.

BMW reckons the 220d will be the most popular, capable of up to 50.4mpg with the manual gearbox fitted. This model is also available with xDrive all-wheel drive, but this worsens economy to 46.3mpg. The rear-wheel-drive-only 225d officially returns 47.9mpg. 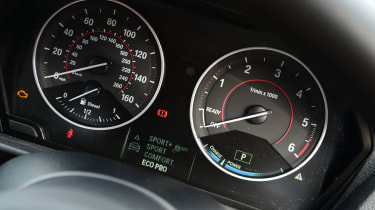 The downsized and turbocharged petrol models aren’t particularly far behind in efficiency, though, and as buyers turn their back on diesel we expect them to prove more and more popular. The 218i gets a 1.5-litre three-cylinder engine and will return up to 38.2mpg. The 220i auto has the same quoted figure, while the 230i is slightly worse at 36.7mpg, although again changing to bigger wheels will have an effect on these figures.

The M240i is pretty economical when you consider it can do 0-62mph in 4.8 seconds, a figure of 38.7mpg is pretty good, and is helped by the fact that this model now only comes with the 8-speed auto box with no manual option.

Prices range from around £26,000 to just under £40,000, so all cars cost the same in road tax, unless you go mad with the options on the top-spec models, which will see road tax add around £300 to your bill for the first five years you pay for it.

With its sporty character and punchy performance you won’t find insurance especially cheap as even the entry model 218i gets a group 20 rating. At the other end of the scale the hot M240i earns a group 39 rating. Still, it’s not too bad in comparative terms, as the Toyota GT 86 sits at group 33 and the Audi TT starts at group 35.

Our experts’ retained value prediction of 47.6 per cent for the BMW 2 Series is not class-leading, but is nothing to be ashamed of. It’s just a few per cent behind the VW Scirocco.