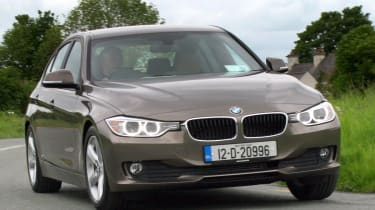 The 316d is the cheapest 3 Series – and one of the best. It’ll appeal to entry-level buyers as much as company car drivers keen to reduce their tax bills. Yet it’s as accomplished as any other 3 Series – and although rather slow, is still enjoyable to drive, with adequate punch. Avoid the base ES and go for the better-equipped SE, and you’ll have a great all-rounder.

This is the least powerful version of the new BMW 3 Series – so is a paltry 114bhp enough for the ultimate driving experience? The 316d has a detuned version of the 2.0-litre turbodiesel from the 320d, and as a result uses less fuel and emits a fraction less CO2.
That peak power figure pales next to the 320d’s 181bhp, as does the 316d’s maximum torque of 260Nm (versus 380Nm for the 320d). However, the £24,880 starting price is nearly £4,000 less than the cheapest 320d – the top-selling EfficientDynamics.
We tested a mid-range 316d SE with BMW’s £1,525 optional eight-speed auto box. Even in that specification, the car is £2,000 cheaper than an entry-level 320d auto, so there are savings to be made – great news whether you’re a private buyer, company car driver or fleet manager.

The excellent eight-speed auto aids efficiency, bettering the six-speed manual model with 64.2mpg fuel economy and CO2 emissions of 117g/km (versus 62.8mpg and 118g/km).
Apart from the 109g/km 320d EfficientDynamics model, the 316d is the most efficient 3 Series currently on sale. Automatic 318d and 320d versions attract the same 17 per cent Benefit-in-Kind (BIK) tax rate, but the ED undercuts them all at 15 per cent.
Despite the price difference, the 316d SE looks identical to any other SE models, and incorporates stylish 17-inch wheels. Other standard kit includes auto lights and wipers, parking sensors, cruise control, Bluetooth, leather steering wheel with infotainment buttons plus dual-zone climate control.
Cloth seats are standard, although it’s worth stumping up £1,265 for the beige leather trim. Not only does it lift the ambience of the interior, it should pay for itself in terms of resale value.
You can tailor the driving experience by altering parameters for the gearbox, air-con, steering and throttle response. ECO PRO mode is included, alongside Comfort and Sport settings. In the first two, the auto box works away quietly, changing up smoothly and at the earliest opportunity for relaxed progress.
If you’re in a hurry, Sport mode sharpens up the throttle and the box holds on to a gear for longer to make the most of the limited power. That does, however, draw attention to how loud the diesel engine is at high revs. Don’t be put off, though, as in spite of the low power and torque figures the 316d is still adequately quick. But ultimately it’s at its best crawling around town or cruising quietly on the motorway.
There’s not enough power to overcome the grip from the rear tyres in the dry, although the 316d is still enjoyable to drive along a twisting road. Its balance and composure are superb, and it feels smaller and more agile than any other car in the class. The steering has plenty of feel, giving you confidence to drive quickly and enjoy it, too.
For buyers on a tight budget who really want a 3 Series auto, the 316d will not disappoint. It’s no performance car, but neither does it disgrace itself. Power aside, it does everything else the more expensive models do, at a usefully lower price. It’s definitely worth spending the extra on SE specification, though – and a few choice extras.