BMW's quirky 3 Series GT four-door coupe is a global sales hit. As a new facelift aims to build on that, we try the 340i. 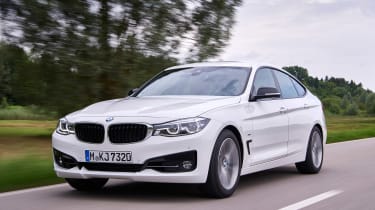 BMW has subtly finessed its unusual 3 Series Gran Turismo for the 2017 model year. A range of new, cleaner engines and the manufacturer’s latest BMW Connected infotainment software have been added, while the extra 20bhp and 50Nm in the new 340i are most welcome. The model remains impressively spacious and refined, but it’s not BMW’s finest driver’s car. However, as seriously rapid executive hatchbacks go, it’s a highly impressive machine.

Another day, another mid-life facelift for a BMW product that looks barely any different to that which has gone before. This time it’s the idiosyncratic 3 Series Gran Turismo (a cross between the Saloon and Touring estate) that’s been subjected to the lightest of updates.

In this case, though, perhaps it’s easier to understand BMW’s reluctance for radical alterations – because the 3 GT has been a big success story for the company during its three-year career. More than 140,000 examples have been sold globally since 2013, with China, Germany and the US in particular falling for the GT’s unconventional combination of a 3 Series front end and hatchback-like practicality. 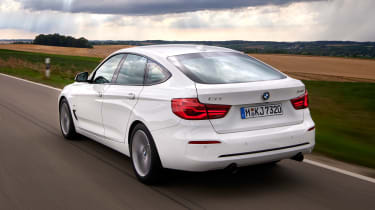 One reason it hits the spot in these countries is that it has cavernous rear seat space; due to the GT’s 2,920mm wheelbase, BMW says it offers as much room in the back as the current 7 Series. That’s certainly true of legroom, but restricted headroom – caused by a raised bench and the car’s sloping roof – means six-feet-plus passengers wouldn’t want to sit in the back for long.

The Gran Turismo’s practicality as a load-lugger remains as compensation, because its 520-litre boot (1,600 litres with the seats folded) is bigger than those in the 3 Series Saloon and Touring.

Visually, the changes outside amount to full-LED illumination at the front and an L-shaped light signature in the rear clusters. The lower air intakes have been reshaped, there’s a different apron at the back and the exhaust pipes are a slightly larger diameter.

Inside, new trim finishes and a smattering of chrome have been introduced, so really the big news is the arrival of the latest BMW Connected infotainment. This is highly automated personal assistant software described by BMW as a “digital friend who learns your daily routines and who can plan your journey before you’ve even left home”. 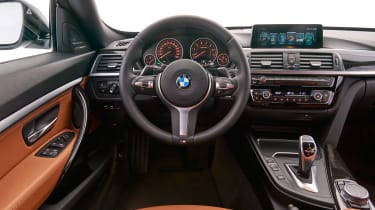 In demonstrations, however, it didn’t work too well, so we’ll reserve judgment for now; it could be one of those offerings that improves through regular software updates.

Although the TwinPower Turbo 3.0-litre straight-six under the 340i’s bonnet is one of BMW’s new 500cc-per-cylinder modular engines, even the most avid brand aficionado would struggle to tell it apart from the motor found in the old 335i GT in the way it goes about its business.

That’s not to say the 340i is a disappointment, though; this is a magnificent petrol engine. Power has climbed from 302bhp to 322bhp here, while torque leaps 50Nm to 450Nm. That makes the 340i GT monstrously quick, with startling step-off acceleration eclipsed by roll-on pace; on a German autobahn it pulled extremely hard well into three figures, so on the UK’s congested and speed-restricted roads owners should never lament a lack of pace. 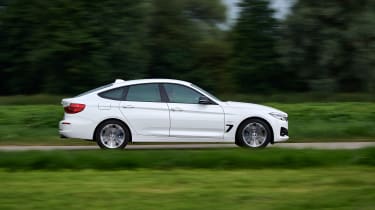 You can also specify the 340i with xDrive four-wheel drive, which takes a tenth off the 0-62mph time at the expense of fuel economy and CO2 emissions. However, there’s certainly no traction issue with the regular rear-wheel-drive car. The problem is, the GT isn’t particularly thrilling to drive.

Its throttle is sharp and the eight-speed Steptronic automatic transmission is quick-witted in Sport or Sport+ modes, but as our car didn’t have the £515 Adaptive M Sport suspension, body roll was quite pronounced. This makes the GT feel lumbering in corners, not helped by its tendency to wash into early understeer before it does anything else. You can adjust the car’s line on the throttle, but the 340i feels ragged when it’s pushed hard.

Better, then, to revel in its refinement, which is of the highest calibre. The ride is absolutely superb across every conceivable road surface, while cabin isolation is virtually as good as in the 7 Series. Thus, the 340i GT is a supremely comfortable and quiet executive express – and as the straight-six petrol engine is becoming rare in the BMW range, it’s worthy of serious consideration if you can live with its looks.