Can the first ever turbocharged M5 deliver the driving thrills of its predecessors? We get behind the wheel to find out 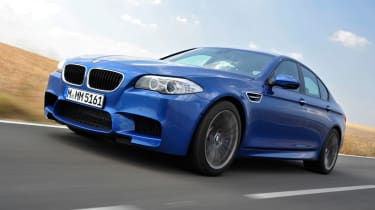 The sheer breadth of this engine's ability is what sets the new M5 above the competition. Smooth, quiet and flexible when it need to be, it also posseses a frightening turn of pace that should leave its rivals standing. Factor in a lightning fast twin-clutch gearbox that's just as happy in auto and manual modes, and adjustable suspension that ranges from comfortable to rock-hard for track work, and the M5 has a sensational dual personality that's never been seen before in an M car. With fuel economy of 28.5mpg it's relatively efficient too, and is just as spacious as a standard 5 Series. Once again, BMW has redefined the performance saloon.

Advertisement - Article continues below
If you were concerned that the first ever turbocharged M5 would be too soft and not worthy of the hallowed badge, you needn't have worried. The new M5 is the best all-round high-performance BMW ever built.
The logic behind replacing the old 507bhp 5.0-litre V10 with a 552bhp twin-turbo 4.4-litre V8 is sound. It produces 10 per cent more power, 30 per cent more torque and is 30 per cent more efficient than the old unit – and it gives the car a whole new Jekyll and Hyde personality.
Video: we put the new BMW M5 to the test on track
[[{"type":"media","view_mode":"content_narrow","fid":"68777","attributes":{"alt":"","class":"media-image"}}]]
Whereas the old M5 was a brutal machine whether you were rolling through town or flat-out on a race track, the newcomer can play both roles to a tee.
Advertisement
Advertisement - Article continues below

The benefit of 680Nm of torque, all available below 2,500rpm, is that the engine hugely flexible. Crusing along in sixth gear at 1,000rpm, if you squeeze the throttle there's still huge reserves of acceleration. At low speeds it feels more like a diesel than a performance V8.
Advertisement - Article continues below
Another surprise is the refinement and comfort levels. Switch the adaptive dampers to their softest setting and the M5 rides better than any 5 Series in the range – thanks in part to the lack of run flat tyres. The engine is hushed too and road and wind noise non-existent. But brutal pace is never too far away.
The seven-speed dual-clutch gearbox, throttle, dampers, ESP and steering all get three individual settings each - comfort, sport and sport+. Start to dial in more aggressive settings and the car reveals its other side. While the engine is smooth and quiet at low revs, keep your right foot planted and it charges hard to the redline - just like non-turbocharged M5s of old.
In case you were wondering, yes it's fast, seriously fast - exaggerated by the fact that it's such a large car. You don't get the same raucous exhaust note as you did from the V10 model, but there's still a fantastic bassy V8 rumble, accompanied by a burble when you back off the throttle. Listen closely and you can hear the twin turbos, located between the two banks of cylinders, spooling up.
Advertisement - Article continues below
Two M buttons located on the steering wheel are used to store your favourite chassis settings. Simply select how ferocious, or gentle, you want the car's responses to be and hold either button down for a few seconds - much like saving a radio station - and that particular configuration is logged.
As you'd expect, on track the M5 finds it difficult to hide its bulk - but then this is a large saloon car with four seats and a sizeable boot. The body control is excellent though and the steering pin sharp - meaning there's huge fun to be had, especially with the traction control turned off.
As with all M5s the styling is subtle, but the chrome-ringed vents in the flanks, big air intakes in the front bumper and the discreet boot-lip spoiler give just enough hints that this is a serious performance machine. The interior too is standard 5-Series, although deeply-sculpted sports seats can be ordered and a sprinkling of M badges are added.
In short, this car adds another string to the M5's bow. By being refined, comfortable and civilised in normal situations, but still retaining it savage character when the time calls for it, it marks itself out instantly as one of the best M cars ever made.
Advertisement