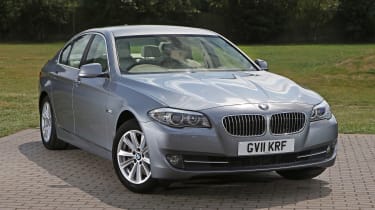 The sixth-generation 5 Series is the most successful so far, with more than a million sold in the first three years. It’s easy to see why; whether you want outright economy, ultimate performance or something in between, there’s a 5 Series for you. From the frugal 520d to the seriously fast M5, everything is catered for – and if you need more room, there’s the Touring (estate). The 5 Series isn’t the cheapest car to buy or to run, but all are well equipped and none of the engines is weak. So even if you can afford only a base version, you’ll never feel as though you should have spent more.

Ever since BMW’s first 5 Series arrived 45 years ago, this executive saloon (and later, estate) has been the default choice for those who wanted a dynamically talented, large family car. But with its efficient engines, superb build quality and comfortable, roomy cabin, the 5 Series has always offered much more than just an enjoyable drive.

Here, we’re talking about the sixth-generation car – codenamed F10, launched in 2010 and replaced earlier this year. While the incoming 5 Series impresses even more, the multi-talented outgoing model makes a superb used buy. Twice it’s been crowned Best Executive Car at the Auto Express New Car Awards. The range is complex, so here’s how to buy the one that’s right for you. 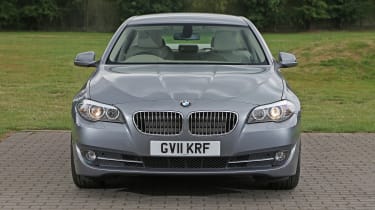 September 2011’s 520d EfficientDynamics was rated at 119g/km; at the same time, the 520i replaced the 523i, the 528i and 525d got 2.0-litre four-cylinders, and switchable chassis settings called Drive Performance Control became standard across the range. A 518d debuted in May 2013 as the line-up was facelifted. The 518d and 520d got more efficient engines from summer 2014.

All engines are excellent and come with a six-speed manual box as standard – but they’re all available with an equally superb eight-ratio auto. The 520d accounts for nearly three-quarters of the 5 Series models available; refined, powerful and frugal, it’s all you need. However, the six-cylinders are even better for their effortless performance teamed with surprising economy. 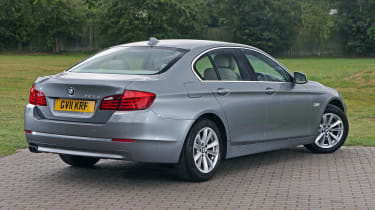 Alternatives to the BMW 5 Series Mk6

The obvious rivals are also from Germany: the Audi A6 and Mercedes E-Class. Both come as a saloon or estate, each has a range of excellent petrol and diesel engines, and both are well built but can be costly to run thanks to their premium status.

The Volvo S80 is a very safe alternative. It’s not as good to drive, but it offers comfort and safety galore – and it has some efficient engines, too. A more left-field choice is the Lexus GS, which came as a hybrid saloon only. The Jaguar XF Mk1 still looks stylish and boasts some excellent engines. An estate was offered from late 2012.

The pedals are offset to the right, and if you’re buying a manual model you might find the skewed driving position a little unfamiliar or uncomfortable. 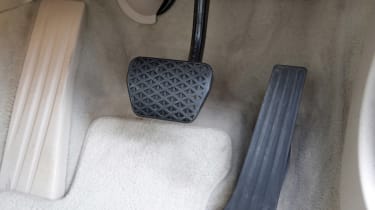 Rims ideally shouldn’t be any bigger than 18 inches in diameter; 19-inch alloys lead to a crashy ride, tramlining and less grip in poor conditions.

Some people find the standard seats don’t offer enough support, so the optional lumbar support or Sport seats are a worthwhile investment if comfort is a big priority.

Make sure you know what you’re buying. The 528i petrol and 525d diesel models went from six to four cylinders as part of the 2011 update, and the former will be thirstier.

Few used cars can match the 5 Series’ cabin. It’s clearly laid out, with plenty of space for four, and it’s beautifully built, too. At speed the refinement is excellent, while visibility is also good. The saloon’s boot is small, though, at only 375 litres; the estate can stow up to 1,670 litres with the seats folded. 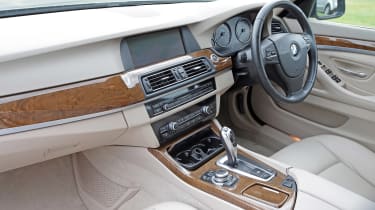 All 5 Series have condition-based (variable) servicing, with maintenance typically needed every 18,000 miles or two years. A minor check-up is priced at £140, an intermediate one at £265 and a major one at £454 if the car is covered by a Service Inclusive package.

Cars sold since 1 July 2013 are eligible for one of these plans, which lasts five years or 50,000 miles; without one of these, the typical service cost jumps by £150, so it’s worth finding a car with a Service Inclusive package.

As all engines are chain-driven no fresh cambelts are needed, but fresh brake fluid is required every two years (at £81). There’s no set schedule for coolant replacement. 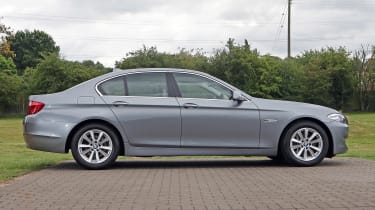 Six recalls is average for a model at the end of its cycle. The first came in April 2012 because a short circuit could lead to a fire. M5s were recalled in September 2012 due to oil-pump failure, while the integral tow hitch prompted a campaign in December 2013; 13 cars were affected.

Variable valve timing failure led to the fourth recall, in November 2011; the fifth came in November 2016 due to potential airbag and belt pre-tensioner problems. The most recent recall, in January 2017, concerned airbags.

In the Driver Power 2017 used car satisfaction survey, a ranking of ninth reinforced the 5 Series Mk6’s breadth of abilities. It scored well for its engine and box, practicality, dynamics and multimedia.