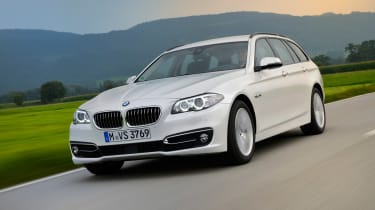 For private and fleet buyers alike, the new BMW 520d Touring is a logical and desirable choice. It’s the most popular 5 Series model worldwide and it’s plain to see why, with strong performance, effortless refinement and striking economy. However, the Touring faces a stern test in the Audi A6 Avant. For every punch the BMW delivers, the Audi counters with a fractionally more polished blow – and for almost £1,500 less.

For years, the BMW 520d was all-conquering, but with Audi’s A6 recently getting the efficient Ultra treatment, the 5 Series now faces convincing opposition. So, BMW has hit back with a new engine for its executive saloon, hoping to be top dog once again.

The new 188bhp 2.0-litre diesel debuted in the updated X3, and gives the 520d a 10 per cent improvement in efficiency and an extra 7bhp and 20Nm of torque over the previous 2.0-litre. Improved cooling and less friction have allowed BMW to eke out the extra grunt, bringing the 5 Series in line with the Audi in the power stakes. 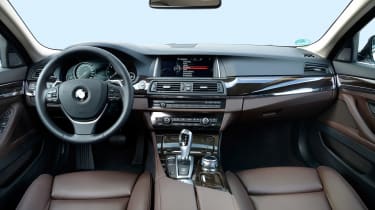 The 520d is fractionally better on fuel, returning 62.8mpg to the A6’s 61.4mpg – although this provides mere bragging rights. CO2 emissions also fall in favour of the BMW, with 118g/km versus 119g/km – yet both cars still reside within the same tax band, so there’s no real benefit for company buyers.

Power delivery is smooth, but it’s still a quick car, with 0-62mph taking 8.0 seconds – five-tenths faster than the A6.

Once up to speed, the engine is well isolated and remarkably hushed for a four-cylinder motor. But full-throttle acceleration above 3,500rpm does make it sound a little coarse, where the Audi remains smooth. Still, most of the oomph sits between 2,000 and 3,000rpm, so you rarely have to venture above that to access the reserves of power.

The eight-speed ZF auto fitted to our test car is a £1,685 option. Slick and precise, it executes changes with little fuss, but the gearbox does have a tendency to upshift early at times, causing the engine to struggle a little. 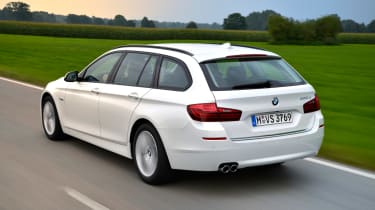 Selecting Sport on the Variable Damper Control (£985) sharpens changes and gives a crisper throttle response. It also bathes the digital instrument cluster in an attractive red.

What hasn’t changed is the BMW’s poise and precision behind the wheel. The handling is delicately balanced, while body control is neat for a car of this size. The cabin is generously equipped with SE-trimmed models boasting dual-zone air-conditioning, Bluetooth, DAB radio, leather upholstery, sat-nav and auto lights and wipers as standard.

As ever, there’s acres of space inside, too, but the 560-litre boot falls short of what’s on offer in the Audi.

The margins between the 5 Series and the A6 are slim. But spec-for-spec, the BMW demands a £1,460 premium, leaning us towards the Audi.