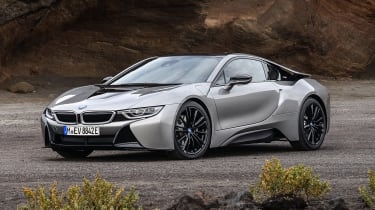 The BMW i8 looks absolutely stunning whichever colour and wheel combination you go for. The narrow LED headlights, elegant curves, spaceship-style rear lights and distinctive flying buttresses all make for a low-slung car with more presence than almost anything else on the road; laser headlights are optional, delivering an even more penetrating and bright beam pattern than the LEDs do – themselves a fairly recent development in headlights.

As a result, you’ll need to get used to being the centre of attention, because the i8 is a car that attracts a constant stream of camera phone wielding car fans. The colour palette is relatively small, however, varying from silver to a far more eye-catching electric blue and black. Some are more eccentric than others owing to brightly coloured accents, but BMW has resisted the urge to offer garish paint tones.

Whatever you choose, the options list contains exterior detailing such as contrasting coloured trim for the skirts and grille, and there are multiple wheel choices, albeit only in 20-inch size to accommodate the unusually thin bespoke tyres. 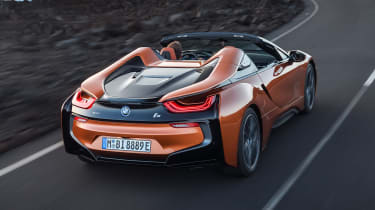 Open one of the i8’s jaw-dropping dihedral butterfly doors and you’ll discover an interior that’s every bit as stylish as the exterior. It’s not quite as futuristic as the smaller i3’s, but the wraparound dashboard is slickly designed and dominated by a pair of 8.8-inch HD screens: the unit in front of the driver displays the speedo, rev-counter and energy use dials, while the centrally-mounted display is for the navigation and infotainment functions.

Better still, quality is top notch, with excellent fit and finish and soft-touch plastics and leather for the dash. As with the smaller i3, recycled and sustainable materials are used throughout, too. It’s also very well equipped, as you’d expect at this price.

A 2018 facelift brought subtle changes to the i8 Coupe, with an active 'Air Shutter' added to the bonnet for better aerodynamics, new alloy wheel options and the addition of a 'Coupe' badge to the rear pillars.

Despite the futuristic leaning of the dashboard design, the infotainment is lifted directly from the BMW parts shelf, meaning you’re dealing with roughly the same iDrive system that everyone from a MINI through a 5 Series driver uses. It’s one of the few disappointments of an otherwise sublime cabin – iDrive’s rotary dial control system remains unintuitive.

It does however come with a 20GB hard drive for loading music onto, and fittingly it’s the latest and most top-end version of the system available (until the 2016 BMW 7 Series arrives, that is), so it includes a host of extra features like real time traffic information and BMW’s Concierge service. A head-up display is standard, but internet functionality costs £95, while a Harman/Kardon stereo upgrade (recommended) costs about ten times that.

The arrival of the i8 Roadster that brought about the Coupe's facelift in 2018 also saw the infotainment system upgraded, while a head-up display was added to the options list.