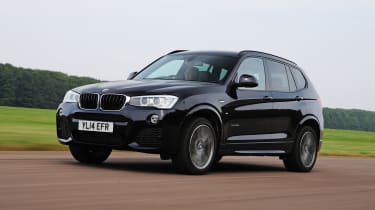 The BMW X3 really didn’t need many changes, which is why BMW has kept the facelift quite light. The new 2.0-litre diesel engine, which will eventually roll out across the rest of the range, is a big improvement, though. It’s smooth, quiet and punchy with class-leading economy – and we can easily see why 80 per cent of customers are expected to go for it. The Porsche Macan is still a far sharper machine to drive, but as a comfortable, spacious and cheap-to-run family SUV, the X3 is hard to fault.

The BMW X3 has always been an excellent mid-sized premium SUV, so this mild mid-life update was all it needed to stay fresh. A few visual tweaks to the front – most importantly new lights – bring the car’s external appearance closer to that of the X5, and it’s definitely an improvement.

BMW has focused on improving the X3's economy, refinement and kit levels, and a major talking point is the new 2.0-litre diesel engine. 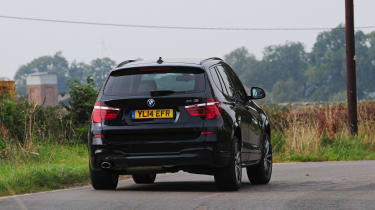 The big difference, though, is much-improved refinement. The previous four-cylinder diesel sounded as if it was running on gravel, but the new unit is much smoother, and far more in keeping with what you’d expect from a premium SUV.

Noise isolation is now on a par with Audi’s, and makes Mercedes’ equivalent 2.1-litre diesel seem rough. Twinned with the optional eight-speed auto, it’s happy ticking along in self-shifting mode. Take control with the paddles and there’s just enough excitement to remind you this is a BMW.

The suspension and steering have been left alone, so the X3 tackles bends just as precisely as the previous car and makes the most of its high ground clearance with a wonderfully supple ride. The sharp steering weights up through the four driving modes, and despite a fair bit of body roll on turn-in the car always sticks to the line like glue. 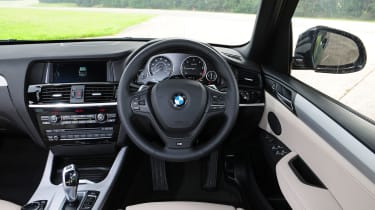 There was little wrong with the way the X3 looked before, but the facelift brings a little nip and tuck nonetheless. There are twin circular headlights, reshaped bumpers and LED indicators in the wing mirrors, while inside are new cup-holders, a piano black centre console and more trim colours.

Inside, the differences amount to piano black trim on the centre console and some new cup-holders. The X3 does get more standard kit than before, though. As well as the leather interior, dual-zone climate control, cruise control and DAB digital radio, there’s now an automatic tailgate, heated front seats and sat-nav.

Hardly revolutionary, but it’s worth noting the X3 has loads of rear space, plus a 550-litre boot that expands to 1,600 litres via the 40:20:40 split-folding seats – sitting between Land Rover’s larger Freelander and Audi’s smaller Q5.

However, customer demands for the latest tech mean you can now order the X3 with a Driving Assistant Plus package, including lane departure warning and active cruise control with Stop & Go.

The X3 range remains largely the same, which means it’s still a spacious, fine-handling and comfortable off-roader. Larger-engine variants are priced too close to the Porsche Macan, but in 20d guise the X3 makes perfect sense.