It may be fast and have a superb engine, but the BMW Z4 M Coupe isn't a winner. 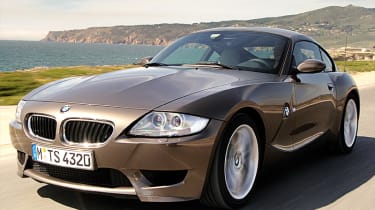 Driving The 3.2-litre straight-six makes the M Coupe nearly as fast as BMW's flagship M6, which costs twice as much. At 1,495kg, the M Coupe isn't that light and keeping wheelspin under control off the line was tricky. Yet the 0-60mph sprint was polished off in only 4.7 seconds. In-gear thrust is equally strong, the M Coupe responding urgently from as little as 2,000rpm. But it's not only the acceleration that makes the driving experience. The engine sounds stunning, too - it's meaty and muscular at low revs, while at 8,000rpm it'll make the hairs on the back of your neck stand up. You often find yourself blipping the throttle and changing down, simply to savour the sound. Not that the heavily sprung clutch and weighty gearlever are easy to use initially - both require practice. Stopping power is awesome, though. But there is a downside: throttle response, which is almost too sharp - particularly if you engage Sport mode. It's hard to avoid kangarooing in traffic and on bumpy roads. Part of the problem is that the suspension is too hard. The damping fails to take the sharp edge off bumps adequately and the fat tyres tramline too much. As a result, the M Coupe feels constantly busy, and although it does offer a more relaxing ride on motorways, noise levels are high. On challenging roads, the M Coupe was unsettled, failing to tackle corners smoothly. The steering lacks feel and the car comes across as unruly. Yet it's involving and blessed with superb traction.

Marketplace The best things come in small packages - that's a phrase that suits BMW's M Coupe perfectly. Only when you see the two-seater in the flesh do you realise how tiny it is. It's the same length as many superminis, and equally low and narrow too. But that doesn't mean it lacks visual impact. The droopy nose divides opinion but the double-bubble roof is unique, and the new tail treatment works very well indeed. According to BMW, it's a pocket grand tourer that's been shrink-wrapped around the occupants, yet is also designed to be practical and comfortable for daily transport. Exclusivity is guaranteed though; only around 200 per year are expected to be sold; competitors such as the Porsche Cayman, Nissan 350Z, Lotus Europa and Audi TT will easily outsell it.

Owning The cabin design is shared with the roadster, and the attractively sculpted environment is excellent. Clean and logical, it's nicely laid out and extremely well built. The steering wheel is great to hold too - provided your hands are big enough to grab the thick rim properly. Thoughtfully, BMW has placed pads on the transmission tulle to stop occupants bruising their knees during quick cornering. However, it is cramped. Headroom is adequate but there's not much space for elbows of legs, and you have to dip your head to see out of the rear view mirror - otherwise all that's visible is the road directly behind. Further back, the BMW badge forms the boot handle, and access is good. The sliding cover is useful and the deep 300-litre load area swallows golf clubs.