Fuel consumption is reasonable if you drive with a light foot, while Z4 insurance costs shouldn't be too high

Even the sportiest BMW Z4 M40i can show a respectable level of fuel consumption when driven with a modicum of restraint. The official figures suggest 33.6mpg is on the cards in mixed driving, but give in to the temptation of the M car’s easily accessible performance and that figure will quickly dip. The fuel tank isn’t that big either at 52 litres, so you could end up making frequent fuel station stops.

The official WLTP fuel figures for the four-cylinder models are even more impressive with both the sDrive20i and sDrive30i edging towards 40mpg under test conditions. Some owners may get close, but many won’t be able to resist driving with more sporty intent. 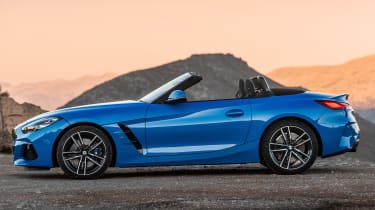 CO2 emissions of 192g/km for the M40i means company car drivers will face top-bracket Benefit-in-Kind tax bills, although the four-cylinder Z4s still emit between 161g/km and 171g/km of CO2.

The sDrive20i versions just dip under £40,000 which means you won't have to pay the additional road tax rate of £325 during years 2-6. But, be careful of adding costly optional kit as the overall list price will soon tip over the threshold. The sDrive30i and M40i will cost £475 a year to tax during this period, while the sDrive20i attracts the standard £150 per annum.

The BMW Z4 insurance ratings sit between group 30 and 37, which is competitive compared to the Porsche Boxster which ranges from group 46-49.

Premium sports cars tend to be in demand on the used car market, and the BMW Z4 doesn’t buck the trend. That means it’s a relatively safe place to put your money, with residual values of around 49% for the 2.0-litre models and a slightly lower return for the M40i at around 46%. Optional extras such as the M Sport Plus package will add desirability at resale time