Punchy performance is guaranteed whichever model you pick, but the driving experience can be a little bland

While BMW has ditched the heavy folding hard top of the Z4’s predecessor, it’s still quite a chunky car – weighing in at over 1,400kg. That’s nearly nearly a third heavier than an Alpine A110. As a result, it doesn’t feel as nimble on the road.

However, opt for the 2.0-litre four-cylinder sDrive20i and you'll enjoy a car that's lighter than the range-topping M40i, and therefore more fun to drive. Sharper steering and tighter body control are trade-off for a relative lack of straight-line punch in the more powerful versions.

It’s an impressive performer, there’s no doubt, with masses of grip, barely any body roll, and steering that’s precise. That’s down to perfect 50:50 weight distribution, and a centre of gravity that’s been lowered in part by ditching the old car’s heavier folding roof. However, while all that adds up to a car that will corner impressively quickly, there’s a disappointing lack of road feel reaching the driver’s finger tips through the steering wheel, and this means the overall experience is somewhat less engaging for enthusiastic drivers. 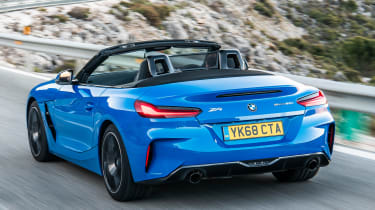 You can aim the car accurately and assuredly, but the steering doesn’t talk back to you. There’s no manual gearbox, and while the eight-speed auto is impeccably smooth and slick, both these factors leave the driver feeling a little distant from the action.

The most powerful engine in the line-up currently is the 3.0-litre twin-turbo straight-six fitted to the Z4 M40i. It’s the same engine used to great effect in the M240i, and will launch the Z4 from 0-62mph in just 4.5 seconds, accompanied by a suitably rorty howl. Here, enthusiasts will give the Z4 extra points over the Porsche Boxster which sounds uninspired by comparison.

The four-cylinder options doesn't quite as thrilling of course, but performance is brisk even for the sDrive20i, which manages 0-62mph in 6.6 seconds. The more powerful sDrive30i brings that down to 5.4 seconds.