The Z4 offers greater day-to-day usability than rival two-seaters, but a 2 Series Convertible is more practical

There’s only the one bodystyle available with the fabric soft-top, and no coupe option for Z4 owners. This may deter some customers who liked the previous generation for the security and refinement of its retracting hard-top, but the upside is the latest roof doesn’t eat up all the Z4’s boot space when it’s retracted. If you really want a fixed roof, take a look at one of the Z4's many rivals.

The latest Z4's roof retracts and deploys electrically in around 10 seconds at speeds of up to 31mph, so you don’t have to pull over when the weather changes. The cabin is practical too, with usable door bins, glovebox and cubbies, although if you want to combine open-top motoring with trips to the DIY store, the larger four-seat 2 Series will doubtless make more sense. 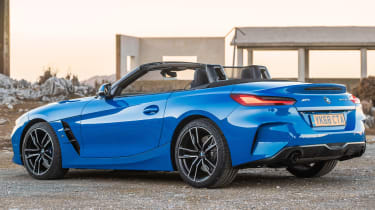 Visibility from the Z4’s driving seat isn’t bad, but that long swooping nose could be awkward in tight parking situations, because you can’t see where it stops. However, parking sensors are standard, while the Parking Assistant self-parking system will be a boon to less confident drivers.

The small 52-litre fuel tank could be a nuisance, as it means trips to the filling station may be frequent.

The BMW Z4 has a decent amount of leg and headroom for its occupants, and feels less constrained than a Porsche 718 Boxster or Alpine A110. It has a greater range of seat adjustment than its predecessor too, so taller drivers have a better chance of finding a comfortable seating position.

Z4 enthusiasts with touring aspirations will be delighted by the disappearance of the folding hard top which destroyed the luggage capacity of the previous model. The latest one is pretty good in this regard, at least for small-ish two-seater. You get 281 litres of boot space, and there’s an optional ski-hatch for longer items. The Porsche Boxster has a similar amount of total luggage volume, but it’s considerably less useful as it’s split between the front and rear boots.