Chart hits: UK's most popular cars of the last 50 years 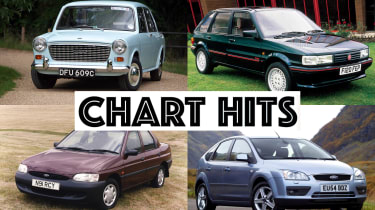 Last year saw a major shift in the UK car industry, with record sales and a growing number of manufacturers producing vehicles on these shores. Superminis and the ever-growing crossover/SUV market are now the best sellers, but back in 1965, the year that the first official car registrations figures were produced, it was the Austin/Morris 1100 that proved to be the UK's favourite car.

Ford's reign at the top began in 1975, when the Cortina took control, and the company has remained at the summit ever since as the Escort was the most popular car in 1985 and 1995 with its replacement the Ford Focus enjoying top spot in 2005.

The figures, gathered with the help of BestSellingCarsBlog, provide a fascinating look into the UK's car buying habits and reveal a 50-year period of enormous change.

So, to find out what other cars have made the top 10 list of the UK's most popular cars check out our detailed review of every decade by clicking the links on the top left menu or below.

Top sellers each decade from the past 50 years

Have you owned any of the UK's top selling cars? Let us know in the comments below...