What are part-worn tyres? And should you buy them? Here's our advice...

Depending on who you ask, part-worn tyres are either a great money-saver or a risky gamble. So we've put together some tips 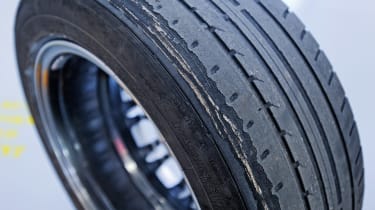 You may have seen signs advertising part-worn tyres for sale at the side of the road and wondered - what exactly are they? Well, to some, they're a cheap and easy way to get new rubber fitted to their car, but to others, they're simply too risky, or even dangerous, to consider.

Part-worn tyres are exactly as you would expect - tyres that have already been used. You'll usually find part-worn tyres being sold by scrap merchants or other sources that deal with second-hand cars or write-offs, as the selling of old tyres is seen as a way of earning a little extra cash on the side. If a vendor is scrapping a car, they will try and salvage its tyres too, if they think they are worth saving.

However, opinion on what constitutes a salvageable tyre can vary between people, and one person's 'safe' tyre could be considered lethal by somebody else. Buying a part-worn tyre is much like buying a second-hand electrical product - you don't have any comeback if there is something wrong with it, and if you have an accident that can be squarely blamed on the fitting of part-worn tyres, then you don't have any legal comeback if you want compensation.

The only real reason for buying part-worn tyres is to save money. If you know the history of the tyres you're looking at (maybe a friend has some track day rubber they no longer need, for example), then it's a pretty safe decision to buy, but the reality is that you're highly unlikely to know what sort of history comes with a part-worn tyre. 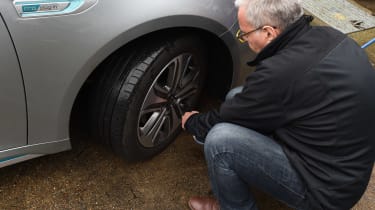 The standard of quality control between vendors that are selling part-worn tyres will be variable at best. Some simply won't be as bothered about issues such as damaged sidewalls and tread repairs as others.

If you're insistent that part-worn tyres are the way to go, the first thing we'd recommend is buying a famous brand, because at least you'll know that the basic tyre will be constructed to quality standards. We'd also buy them in pairs, so that you can get two tyres on the same axle that should theoretically match. If you're just buying one tyre, it’s very unlikely that you’ll be able to find one that matches the other three on your car in terms of tread wear.

Part-worn tyres - what to look out for:

Tread wear is the key thing to inspect. If the tyre has hardly been used, then you should get plenty of mileage from it. But if the shoulders are worn, or there's uneven tread, then who's to say you won't be coughing up again in a few months when your car fails its MoT because the tyres are worn out?

New tyres have 8mm of tread on them, while most outlets and safety organisations recommend replacing your tyres when there's 3mm of depth left. Anything less than this isn't worth working with, and even if there's more tread than this, if it isn’t evenly worn across the tyre it’s best to look elsewhere.

If the tread is fine, it's time to check the sidewalls. If the tyres have come off a car that has been involved in an accident (again, how do you know if they have or haven't?), then there's a high possibility that the tyres may have been damaged in the incident. Perhaps bodywork has come into contact with the tyre or lateral forces have damaged the sidewall's construction. 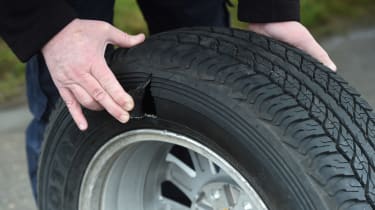 Irrespective of this, sidewalls can be damaged simply by poor parking. Any cuts, scrapes or loose rubber on the sidewalls could be a portent of damage to the tyre's construction, so always inspect the inside of the tyre for a consistent look to the internal part of the sidewall, too.

Another issue is with repaired tyres. If a tyre has suffered a puncture caused by a nail, screw or other sharp object piercing the tread, then it can be repaired with a plug of rubber that seals the tread against leaks.

There's nothing wrong with these repairs, but where the tread has been punctured, there will be damage to the belts that help the tyres retain their shape. Some tyres are unable to be repaired, and those that are may be limited in their maximum speed rating. Again, check the interior carcass of the tyre for damage. If you're being thorough, then it's probably worth walking away from tyres that have any kind of damage to them, either inside or out.

Should you buy part-worn tyres?

The reality is that part-worn tyres are a gamble, even in the best-case scenario. With unknown history and the potential for failure, you could be taking your life and that of others into your own hands. What could be a potential saving in the short-term could pay back dearly in the future. 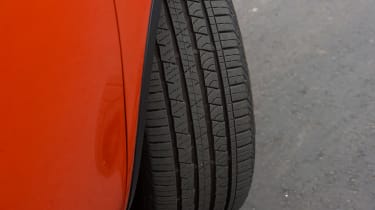 If you are set on buying some part-worn car tyres follow our easy steps below to give yourself the best chance of getting a good deal.

1. Buy from a reputable seller.2. Find out as much as you can about the history of the tyre.3. Look for top brand tyres.4. Buy in tyres in pairs so the tyres on each axle of your car match.5. Check the tread depth and look for uneven wear.6. Check the tyre carcass inside and out for any damage or repairs.7. If in any doubt, don’t buy.

Have you ever bought part-worn tyres before? Tell us about your experience in the comments section below...