Is a petrol-LPG car a good choice in the UK? We drive the new Dacia Duster Bi-Fuel SUV to find out… 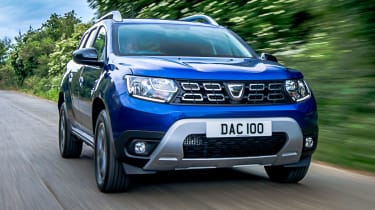 Dacia’s new range of petrol-LPG models could spark a renaissance in bi-fuel cars. The Duster TCe 100 Bi-Fuel makes for an interesting and cost-effective alternative to diesel models for drivers covering more than average annual mileages. With a price premium of just £400, and little impact on packaging, the factory-developed and engineered LPG model could make huge financial sense, providing you live or work near, or regularly pass by one of the UK’s 1,400 LPG-equipped fuel stations.

LPG was the right fuel at the wrong time when it was pushed hard through government incentives years ago, say Dacia’s bosses. Today, against a backdrop of economic pressures to reduce CO2 emissions by any means necessary, Dacia has sidestepped the usual route of electrifying its models to choose LPG as the route that it says best suits its brand values, at least until the Spring Electric surfaces next year.

That’s ‘values’ in both senses of the word, because to choose a Bi-Fuel model over a regular Duster TCe 100 costs just £400 extra. For context, that’s £160 less than the cost of metallic paint.

Dacia has long produced LPG cars, and lays claim to being the only manufacturer selling a LPG car direct from the factory in the UK. The modifications are performed on the existing production line, and the handful of new parts fitted represent a marginal weight increase. The 34-litre tank is six times thicker than a petrol tank and sits in place of the spare wheel, meaning that while a can of tyre foam is the get-you-home puncture solution, it allows the standard petrol tank to be retained.

The Duster looks and feels identical to its petrol and diesel siblings, meaning it’s charmingly rugged, spacious and is easy to drive around town, if although fairly agricultural at speed. The interior feels robust, if lacking tactility, but our mid-spec Comfort trim is well appointed for the money.

The sole change inside is an aftermarket-looking button and gauge unit located to the right of the steering wheel. This shows the amount of LPG in the tank, and lets the driver toggle between the two fuels. It takes a few minutes for the system to reach temperature, so the Duster can’t be started immediately using LPG. Once you’re moving you can flick seamlessly between the fuels, and it’ll automatically switch to petrol once the LPG tank runs dry.

The thrummy 999cc three-cylinder engine produces 99bhp at 5,000rpm, but switching to LPG sees torque swell by 10Nm to 170Nm and peak slightly earlier at 2,000rpm. Dacia claims improved driveability, but you’d be hard-pressed to see a difference. The engine is quiet at moderate speeds, but as the engine speed builds, it starts to lose that composure. Despite the tweaked torque curves, the Bi-Fuel is slower from 0-62mph than the regular TCe, recording 14.4 seconds using petrol or 13.8 seconds on LPG. 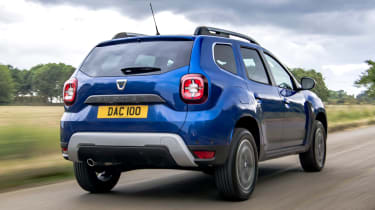 It’s improved running costs, not acceleration times, that will concern LPG buyers. Based on today’s bargain-basement fuel prices, the average-mileage driver could recoup the Bi-Fuel’s £400 price premium in around a year, thanks to LPG costing around 40 per cent less than unleaded - even if it’ll use more gas than petrol per mile

Dacia’s economy figures claim 44.1mpg and 35.3mpg, and CO2 emissions of 145g/km and 129g/km during petrol and LPG running respectively. NOx is reduced, too. It’s classed as an alternative fuel vehicle, meaning VED costs £130 a year.

Refuelling takes a little getting used to, as a small adapter is required for many UK forecourts. This screws into the valve hidden behind the fuel filler flap, onto which the fuel nozzle attaches like a bayonet light bulb. Once filled to a maximum of 80 per cent capacity, to allow for gas expansion, both the nozzle and the adaptor can be removed. Dacia says the Duster Bi-Fuel is safe to use underground car parks, but as with LPG conversions, it can’t be taken on the Channel Tunnel.

Dacia says Bi-Fuel models will represent around 15 per cent of all engine options, however current finance offers suggest it could be more. The additional components have no impact on servicing costs, and Dacia is currently paying the first three monthly repayments. Our Comfort-spec test car could cost just £5 a month more than the petrol equivalent after PCP dealer contributions. That means if you’re located near a LPG retailer, the Bi-Fuel makes the potential fuel cost savings really rather appealing.