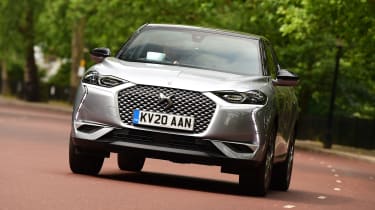 Fundamentally a good car, this DS 3 Crossback E-Tense is let down by its mediocre kit list and high price. The fact that the equally luxurious Peugeot e-2008 is thousands of pounds cheaper not only rubs salt in the DS’s wounds, it renders this Ultra Prestige model a frivolity in what is becoming a mainstream part of the market. Cheaper versions represent better value for money.

The electric car market is divided into two halves. Luxury models like the Jaguar I-Pace gained attention due to their big electric range and premium image, while mainstream cars like the Renault Zoe have seen big success thanks to affordable pricing mixed with cutting-edge tech.

But as is true elsewhere, there are makes and models that blur the lines. One of these is the latest DS 3 Crossback E-Tense; PSA Peugeot-Citroen’s take on the small electric SUV straddles the boundary, offering a supposedly upmarket badge at a price that undercuts anything from premium players like Audi, Mercedes or Tesla.

The thing is, like its petrol and diesel siblings, the DS 3 E-Tense shares its platform and powertrain with more humble cars like the latest Vauxhall Corsa-e and Peugeot e-2008; distinctly mainstream models with no premium pretensions.

Don’t let that put you off, though. After all, the Audi TT is little more than a Volkswagen Golf in a fancy frock – and that hasn’t harmed its success as a sports car. So let’s park that thought for now and look at what the DS 3 offers as a standalone product.

On the road, the DS 3’s smooth and punchy powertrain will win over any EV sceptic. Power delivery feels urgent yet smooth in equal measure – the characteristic electric zip is instantly accessible from a standstill. Things tail off towards the national speed limit, but the DS holds enough in reserve to feel comfortable on the motorway.

Speaking of comfort, the plush leather seats in our test car do a fantastic job of taking the edge of what is ostensibly quite a firm ride. It means that around town there’s very little to complain about; the steering is light, and save that poor rearward visibility, the DS 3 is perfect for nipping about in.

That light steering fails to reward keen drivers, however, with little in the way of feel or feedback. It’s a shame, because the DS 3 is fairly agile for a car of this type – even if it does have a tendency to follow ruts and ridges in the road. Still, refinement is excellent thanks to the quiet electric motor, thicker glass and acoustic windscreen – all features you won’t find on the petrol model. 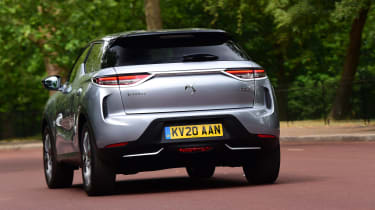 The quoted 199-mile range is probably closer to 150-170 miles in real world driving, but even that makes it a much more usable proposition than style-focused rivals like the new MINI Electric or Honda e. Unlike its Corsa-e cousin, every DS comes with a three-pin plug, as well as cables for 7kW charging; customers can upgrade their car’s hardware for faster 11kW charging at a cost of £400. Topping up the batteries is made easier still thanks to 100kW DC rapid charging, allowing for a 10-80 per cent charge in around 30 minutes.

Available in three of the petrol car’s four specifications, as well as unique La Premiere trim, the DS 3 Crossback E-Tense starts from £30,990 after you factor in the government’s £3,000 plug-in car grant. Equipment levels are little more than average, though; that entry price gets you 17-inch alloy wheels, keyless start and a seven-inch touchscreen, but you’ll need to upgrade if you want LED lights or leather seats.

Our Ultra Prestige test car is the most lavish of the standard specs, and brings kit like a larger 10-inch screen, a heads-up display, matrix lights, 18-inch wheels and a set of super-comfortable watch-strap-style seats. But at almost £36,000, it isn’t cheap; you get a similarly luxurious equipment list on an e-2008 costing five grand less.

That said, buy running a DS 3 E-Tense you’ll potentially save thousands when compared to an equivalent petrol SUV. There’s no road tax to pay, and every electric car is exempt from Benefit in Kind (BiK) company car tax until 2021 – making it an incredibly cost-efficient company car. If you can stomach that high purchase price and charge at home overnight, there are massive financial advantages to be had. 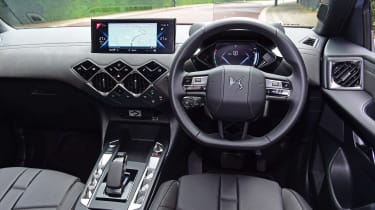 On the whole, interior quality in the DS is good, though the dashboard design won’t be to all tastes. It mirrors the petrol car’s diamond theme, with a set of unresponsive touch-sensitive buttons below the central screen, controlling everything from the sat-nav, to phone connectivity and climate control. Despite the fact the system is a bit laggy, the layout is intuitive enough to use.

While the narrow instrument cluster isn’t as impressive as the Peugeot’s trick three-dimensional set-up, it presents all the information you need in a logical fashion, and the graphics sit well with the car’s modern feel. You can bring up a simplified map within the dials, while the ability to flick through trip info and media settings is made easy by the steering-mounted controls.

Those wondering about practicality will be pleased to hear there is no compromise to be made by switching to electric. The standard petrol car isn’t the most versatile vehicle, but if the space on offer suits your needs, the identical electric version boasts the same 350-litre boot – expanding to 1,050 litres with the rear seats folded flat. A Kia e-Niro or MG ZS EV are bigger.

Space in the back of the DS isn’t great either; a fact made worse by the questionable slab of plastic obscuring part of the rear window. This not only makes the rear seats feel a little claustrophobic, depending on your driving position, it can affect over-the-shoulder visibility, too.