Latest posh DS 3 drop-top has MINI Convertible in sights, but how does it drive? 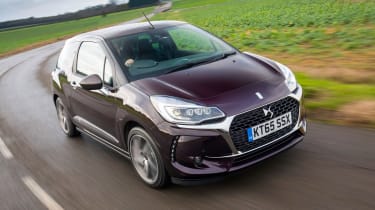 The DS 3 is a stylish and distinctive car that only gets more desirable in Cabrio form. It’s one of the more practical drop-tops in the class, too, but it doesn’t deliver the full wind-in-the-hair experience because of its fixed roof pillars. The DS 3 is generously equipped, yet it lacks the premium cabin polish some might expect, while the ride and handling aren’t quite up to the high standards of the MINI. Prestige spec is also quite expensive, so settle for a lower trim level.

Buyers in the market for a small convertible car are spoiled for choice nowadays. At the bottom of the range sits city cars like the Peugeot 108 Top, while above them are more premium options like the Fiat 500C. If you've got more money still to spend you can consider the MINI Convertible - and now there's this, the revised DS 3 Cabrio.

Like the hard-top DS 3 hatchback we tested, the Cabrio gets a new front-end design that strips it of any Citroen styling cues. A chrome-edged hexagonal grille is the biggest tweak, while keen fans will also spot new alloy wheel designs and subtly revised tail-lamps. 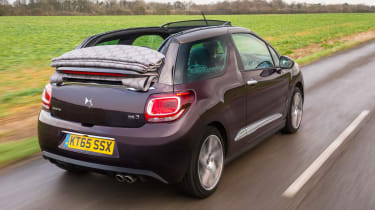 The biggest appeal for some will be the increased range of personalisation options for the exterior colour and trim. Alongside the multitude of paint choices, the DS 3 has four roof trim options – including the distinctive Monogram fabric on our test car.

That’s more choice than you’ll find on the MINI or Fiat, while the Cabrio also gets new graphics to help it stand out even further. The roof mechanism is unchanged, allowing the canvas hood to slide into one of three positions: halfway open like a sunroof, back to the top of the rear window or folded all the way back over the boot (which severely hinders rearward visibility).

Inside, you’ll initially struggle to spot the changes, but you’ll find a feature-packed touchscreen with Apple CarPlay and MirrorLink smartphone connectivity. The screen layout is shared with other Citroen and Peugeot models, though, and it’s not exactly the easiest to use, with a multitude of clunky menus to navigate. MINI’s rotary dial control system is more intuitive. 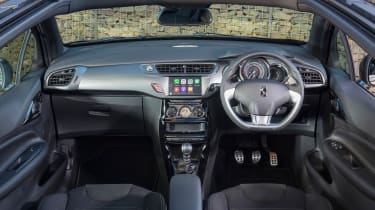 Like the hatch, interior quality is good for the most part, but less impressive in some areas. The gloss-black centre console and metal-effect dash look smart, as do the instruments, although you don’t have to poke around too far to find cheap-feeling bits. The tiny, undamped glovebox is particularly flimsy, while plastics lower down the dash aren’t a patch on the MINI’s.

Space is impressive for a car of this type, however, with better rear head and legroom than in either of its main rivals – plus three seatbelts across the back. The 245-litre load area is the biggest of the trio as well, yet the vertical-hinged bootlid leaves a tiny opening.

Cabriolets have a reputation for being more about trundling down sun-soaked boulevards than taking on fast back roads, but the MINI Convertible bucks that trend by being really quite fun to drive. The DS 3 isn’t far behind it, though, with a good balance between handling and ride comfort. 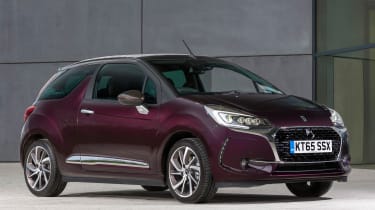 The steering is accurate if a little slow next to the MINI’s rack, and it feels agile thanks to the car’s mere 30kg weight penalty over the hatch. That also aids performance, as our test model with the 1.2-litre PureTech 130 petrol engine is only a tenth of a second slower from 0-62mph than the hard-top. It’s a strong, flexible unit and our pick of the range, although it’s not as willing to rev as the MINI Cooper’s three-cylinder.

Unfortunately, the DS 3 Cabrio suffers from a fair bit of body flex, meaning the whole car shimmies more over big bumps – causing the rear view mirror to vibrate over rough surfaces. While you can accept that in the MINI, it’s disappointing here as the Cabrio isn’t a true drop-top due to its fixed roof pillars. At least refinement is admirable, with little extra wind or road noise seeping through the canvas compared to the hatch.

The DS 3’s biggest drawback, however, is its price. Our Prestige-spec test model costs £21,095 – making it considerably more expensive than a MINI, which comes in at £18,475. Even when you consider the French car’s decent kit list, it can’t compete for cabin quality or driving pleasure.