Fiat's all-new 500 city car has a range of 199 miles and is priced from £21k can it claim top spot in the small electric car class? 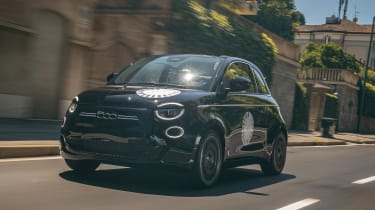 We’re quite taken by our early drive of the new 500. It’s fun and easy to drive, as you’d expect an all-electric city car to be, and is packed with the latest technology. The numbers stack up well on range and charging, and the latest redesign makes the Fiat cuter than ever. It feels like a very well judged upgrade for those 500 owners wanting to jump to an EV. Pricing will be key, but if Fiat gets it right (and it looks like it will) then the firm looks likely to have another 500 smash hit on its hands.

After 63 years and more than six million sales, it’s time for only the third generation of Fiat 500. This time, though, the new model will only be available as an electric vehicle – which seems apt for the world’s most fashion-conscious city car. And Auto Express has been to the 500’s home in Turin to get an early drive in a prototype of the new model.

It’s a welcome return home to Fiat’s famous Mirafiori factory for the 500 – the result of a multi-million-Euro investment in the plant that backs onto Fiat Chrysler Automobiles’ headquarters in Turin. The streets of the famous Italian city are ideal to test the new 500 on, too.

But first Klaus Busse, head of design for Fiat, Abarth, Lancia, Alfa Romeo and Maserati, gives us a guided tour of the car. “We had to be really careful with what we could do with the third generation of 500,” Busse tells us. The result is a car that’s quite clearly a gentle, but clever, evolution. “It has a very unique silhouette,” continues Busse. “It was important to make it instantly recognisable.”

And that’s exactly what he’s done. The latest 500 is even cuter than before, with some beautiful details, such as the split LED headlights that the bonnet cutline goes right through the centre of.

There are plenty of nods to the past, such as the lack of a traditional grille at the front; the original car had the engine in the back so didn’t need the cooling, and neither does this electric version.

Put the new 500 next to an old one and it looks bigger, although it’s only around 60mm longer and wider. Busse and his team have done a good job of disguising the car’s power pack, too; the roof is only 29mm higher.

Inside, there’s a two-spoke steering wheel, a circular instrument binnacle with seven-inch digital display, and a 10.25-inch infotainment touchscreen that sits on top of the dash, where the original’s rear-view mirror was. It’s a neat touch when the reversing camera shows the view behind.

Our early car is a cabriolet, which will probably command around a £2,000 premium over the hatch, and it seems quite fitting as we head out of Fiat’s garage into the streets of Turin.

As we leave the underground lair, we can hear the sound Fiat has chosen for its EV to warn nearby pedestrians; it’s an electric version of the famous Italian Amarcord melody by Nino Rota.

The new 500’s fun character is clear from the moment we put our foot down and the instant hit of 220Nm of torque from the 115bhp electric motor comes through. We spring forward into the Turin traffic, only to hit the brakes very shortly afterwards and find that they are nicely modulated. 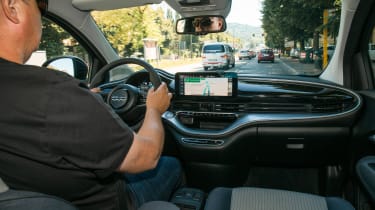 To start with we’re in Normal mode, which is designed, says Fiat, to give you the feel of a combustion-engined car. Switch into Range and you can drive on one pedal, but we’d suggest Fiat calms down the regenerative braking; it’s a bit fierce and may put off first-time EV drivers. Sherpa is the most eco-friendly mode, turning off the climate control and optimising range.

Our feedback to Fiat’s eager engineers is to beef up the steering a bit, too. It’s a little light and feels like the old 500 in City mode. It’s okay for parking, but we’d like a bit more weight in everyday driving.

Our car is pretty close to the la Prima first edition cars with 17-inch wheels; most cars will sit on smaller rims. Even so, the ride is pretty good – a little firm, but then Turin’s streets rival the UK’s for lumps and bumps, and smaller wheels should be better still.

The combination of point-and-squirt electric power, a decent ride and a tight turning circle (9.7m) make for a near-perfect city car. It’s just a shame that the cabrio’s roof still limits the rear view when it’s folded. It goes up and down quickly and easily, and refinement is impressive when it’s shut – but we think we’d prefer the cheaper hatch with a panoramic glass roof.

Space inside is better in the front – helped by an increase in internal width of 42mm and headroom by 10mm – but pretty limited in the back, even though there are only two seats. The boot remains at 185 litres, but there are cubbies in the cabin.

All of the controls, including the push buttons for the gear selection, work well and look good, while there are also buttons (plus a manual override) to open the doors.

Current 500 owners will also be pleased to hear that it feels like you sit in the new car rather than on it as in the old model; the driving position is pretty much spot on. 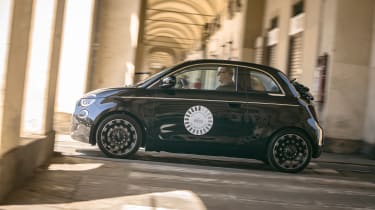 The touchscreen works well and features Fiat’s latest UConnect infotainment system, which will hook up to a smartphone app and can even be updated over the air.

Fiat says this is a car for the next 10 years, so the latest Level 2 autonomous technology, which will accelerate, brake and steer for you on the motorway, can be specced, along with other posh features including a keyless entry and start system.

The 42kWh battery packs sit under the seats, while the charging socket is where you’d expect the fuel filler to be, at the back. Fiat says the 500 will officially go 199 miles between charges, although that can be stretched to 250 if you stick to the city; we reckon those figures seem pretty realistic.

If you need to, you can fast charge at up to 85kW, which will give you an 80 per cent charge in 35 minutes or 30 miles of range in just five minutes. You’ll be able to fully charge overnight on a home unit.

The la Prima special-edition models cost £26,995 for the hatch and £29,000 for the cabrio – both after the government’s plug-in car grant. Fiat says it hopes there’s not going to be a huge gap between the existing model that remains on sale (see panel) and the new 500; the rumoured starting price of around £21,000 would be very good news.

That would mean the new Fiat 500 will go farther on a single charge than a MINI Electric or Honda e and undercut both on price. You’ll have to decide which wins the cutest car contest, though.