The 500 might be much bigger than the original, but its still small by today’s city car standards.

Buyers of the cute Fiat 500 are unlikely to have practicality at the top of their wish lists, and that’s a good thing, because they won’t really find it.

If you want outright space, Fiat offers the family-sized 500L and back-to-basics Panda, so the three-door only 500 remains a traditional city car built for one or two. That’s fine for the most part, but the 500 simply can’t compete with cheaper cars like the Hyundai i10 and Skoda Citigo for outright space.

The dinky exterior size hinders outright passenger space, but it’s a bonus around town where these cars spend most of their life. For starters, the 500 is extremely easy to see out of and park, helped by a high driving position and big windows. Nowadays, only a Smart can compete with the 500's ability to squeeze in even the tightest spaces.

Step inside and, up front at least, you’ll find excellent headroom that belies the 500’s tiny size. Legroom is adequate, although the narrow pedal box is a bit of an issue for big feet. Things take a bit of a down turn too when you find there’s limited height adjustment on the steering wheel and no reach adjustment at all. And while the high-set seat offers a great view out, it’s certainly not to all tastes. Also, beware of the optional sunroof which eats a big chunk of the headroom.

The rear seats are certainly not a place you’d want to make adults sit for more than a few minutes. Legroom is pretty poor, while that curvy roofline means heads will be squashed like in a coupe. If you’ve got young children, however, it’s a perfectly useable space and rear access is easy enough as the doors open wide and the front seats slide forward a decent amount.

The dashboard-mounted gearlever should free up some extra room, but storage in the cabin isn’t much to write home about. Sure, there are handy compartments below the seats, but the glovebox is small. The few cupholders and door bins Fiat provides aren’t much use either. 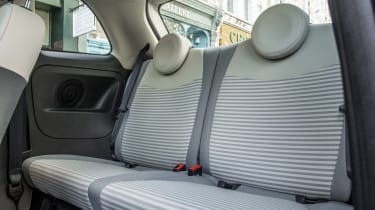 Don’t expect too much from the 500’s boot and you’ll find it just about big enough for the odd shopping spree. The 185-litre load space isn’t great when you consider the VW up! has a full 252 litres, but it compares well with the Toyota Aygo (168 litres).

It also extends to a full 550 litres with the seats down, which is around 180 litres smaller than the MINI. You’ll have to pay extra for split folding chairs on Pop models, but all trim levels above that get them as standard. There’s no underfloor storage to be found on the little Fiat, however, and the high load lip and narrow opening means you won’t be carrying much home from your local DIY store. But you could argue that’s not necessary in a small car like this.