The 500 remains popular with customers, with positive feedback on reliability and running costs.

When it was first launched in 2007, the Fiat 500 scored the maximum five-star rating in the Euro NCAP crash tests, but it was re-tested in 2017 under the organisation's tougher test regime and lost two stars.

Fiat fits driver, passenger, side, curtain and driver's knee airbags as standard, making a total of seven, which is better than most city cars. ABS brakes and Isofix child seat mountings feature, too. The hazard lights come on under hard braking to warn traffic behind but the trigger point is over-sensitive.

The Fiat 500 is a car with a strong following and that’s reflected in its decent finish in our 2020 Driver Power owner satisfaction survey. It finished in 45th place out of 75 cars, with strong individual scores for its styling, interior and running costs. Safety levels and overall quality were flies in the ointment, however. 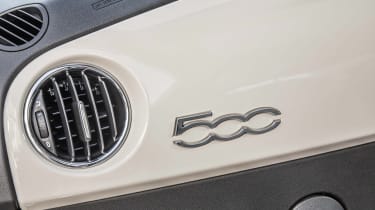 The 500 comes with a two-year manufacturer's warranty and a further year’s guarantee from the dealer. That’s par for the course, although Hyundai offers five years with its i10 and Kia offers an impressive seven years on the Picanto. The 500 also gets a reasonable three-year paintwork warranty and an eight-year anti-perforation guarantee.

All 500s need maintenance every 18,000 miles or two years, although there’s the option of an annual service if the car covers less than 9,000 miles per year. We’d recommend sticking to the latter for at least an oil change. Servicing costs vary wildly according to model and engine, however.