The 500 offers retro-styling in a small package, with a good level of standard kit

The Fiat 500 is a modern-day reboot of the original 500, which was launched in 1957 and captured the hearts and minds of the public.

The current version is much bigger than the original, but it's clearly a Fiat 500 with its charming curvy lines, upright stance and cute circular headlamps. The 500's dashboard is also painted the same colour as the exterior – a nice carry over from the original.

The new 500 was launched in 2007 and remained largely unchanged styling-wise until summer 2015 when Fiat tweaked the looks inside and out. At the front, the refreshed 500 gets an extra chrome strip (reminiscent of the larger 500X crossover), new larger elliptical daytime-running lights and on top-spec Lounge models a flashy studded lower grille. To the rear, there are new ring-shaped light clusters with body-coloured centres. 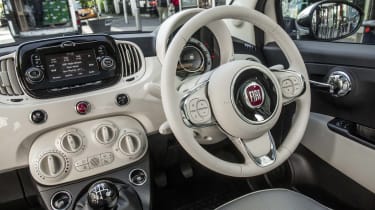 On the latest 500 you’ll be able to spec an even wider choice of personalisation features. A selection of body wrappings, known as ‘second skin’, can be added to panels, the roof or even the entire car for a fee. Everything from chequers, to butterflies and even an army camouflage can be specified. That’s on top of the ever-growing and vibrant colour choices inside and out, which Fiat changes on an annual basis to keep things fresh.

One existing problem with the 500 that hasn’t been improved particularly is material quality. Some interior plastics are pleasing to the eye and touch, but there’s also some rather nasty door finishes and flimsier trim further down the dash. Fit-and-finish isn’t amazing in some areas, either.

Entry-level Pop models are broadly as before, receiving a DAB radio and USB connection. But step up to Lounge trim and you’ll get a 7-inch touchscreen and Bluetooth, along with Apple CarPlay and Android Auto connectivity. Sat-nav is available as standard for Star, Rockstar and Launch Edition cars. 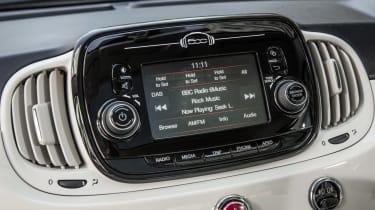 The combination of buttons, dials and the touch interface means the system is easy enough to use and the sat-nav itself is clear, but the MINI’s set-up is a fair bit slicker thanks to addition of a rotary control by the handbrake.