Supermini of the Year 2018: Ford Fiesta

The Ford Fiesta is the 2018 Auto Express Supermini of the Year, with the MINI 5-door and SEAT Ibiza commended 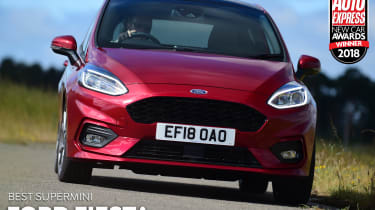 The Ford Fiesta arrived in the UK just after our New Car Awards last year, but even after 12 months on sale its ability isn’t anything less than class leading. This supermini is now in its eighth generation, and you can easily see why it’s been Britain’s best-selling car for a decade.

The combination of affordability, impressive driving dynamics, practicality and infotainment is a big draw for buyers, and when you mix this with Ford’s attractive PCP finance deals (how most people in this sector buy) it’s a winner.

The 99bhp 1.0-litre EcoBoost is the engine to go for. This award-winning three-cylinder turbo petrol unit is punchy, delivers all the performance you’d need and matches this with economy as long as you’ve not got a lead foot, as with any supermini.

It’s planted in the nose of a genuinely entertaining chassis as well, regardless of this car’s price point and intended use. The steering is sharp and just the right weight, while the suspension set-up keeps its composure, allowing you to exploit the Fiesta’s agility.

Clearly, comfort is just as important in a car from which so many drivers will demand so much, and here it delivers, too, with a level of control and maturity that few superminis can match.

In fact, the Fiesta’s new-found maturity shows how far this car and this class have come. Ford’s SYNC 3 infotainment system is a fine example of this. An eight-inch screen is standard on higher-spec models and optional lower down in the range. It’s available with Apple CarPlay and Android Auto, with sat-nav standard on many versions.

Crucially, the screen is well placed in the dash; that’s been part of a major revamp of the Fiesta’s interior, improving not only ergonomics but also functionality. The layout is more logical than in the previous Fiesta, plus there’s extra storage for smartphones, while quality has taken a step up.

However, what’s true to the Fiesta’s character is its fun-to-drive feel, and as it uses an evolution of Ford’s global B small car platform, it still has this in spades. The combination of improvements to refinement and practicality, helped by a 292-litre boot, means the Fiesta can now be used as a family runaround for many, and the car’s dynamic ability ensures the affordable Ford cements its position as the king of the class.

In relatively modest Zetec trim, you still get plenty of kit. Smartphone connections provide nav, or you can upgrade to the larger built-in system if you’d prefer. We’d opt for the 99bhp 1.0 EcoBoost engine; it’s refined and powerful enough to make the Fiesta genuinely enjoyable on the right road. For only an extra £650, the five-door offers more practicality, too. 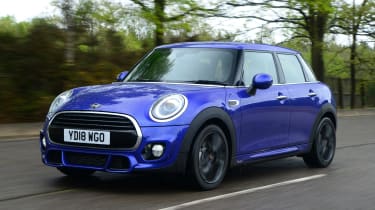 A recent facelift hasn’t diluted the MINI’s appeal. In fact, more personalisation options have enhanced what’s always been good about the British-built car, while in Cooper spec the strong 1.5-litre engine and engaging chassis mean this is one of the most fun hatches on sale. You no longer pay the price on practicality if you go for the five-door, too. 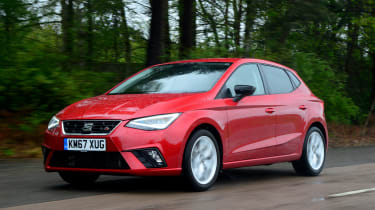 Last year’s winner in this class gets a deserving mention here because it remains one of the roomiest superminis around. As with the Fiesta, the Ibiza really can be used as a compact family car. Slick infotainment, a range of punchy and efficient turbo petrol engines, and affordable pricing for the kit on offer mean it’s a top pick.