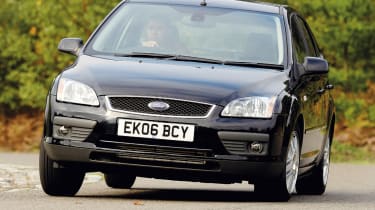 “A fantastic car. The 1.6 engine is a dream and loves to be revved. But it's more thirsty than I imagined, and it definitely needs a sixth gear for motorway cruising.”

“I purchased my Ford Focus ST back in March 2006 and have been completely satisfied with all areas of the car. I am particularly impressed with the ‘big car’ feel of the Focus ST and the sound of the engine. Knocks any other current hot hatch for six.”

“A good car but reverse gear is hard to get into sometimes.”

“My car was great value for money, and does everything I need it to do. Great size boot for carrying all my bits and pieces around. Couple of niggling rattles, but in process of getting them fixed. On the whole, I am very pleased with the car.”

“Very good; a small disappointment has been the lack of a grip handle or recess inside the boot lid (to assist closing) and the slackness of the gas-filled struts which do not consistently take it up to the very top-most point. Also I would have liked the handbrake lever (which is offset from the centre) positioned for right-hand-drive.”

“I love my car and for the price think that it is a reasonably priced high performance car. It is very easy to drive every day to and from work, but at the same time has the ability to take on a more spirited drive should the need arise. Fuel consumption is not the best (between 20 - 29 mpg ), but that is to be expected on a car of this type. Handling and ride quality are good considering that the suspension is set up towards the harder side of settings, the traction control seems to intervene quite frequently to keep the car in line and heading in the right direction.”

“The focus cannot be faulted for day to day commuting and taking it out for a run on country roads is a joy.”